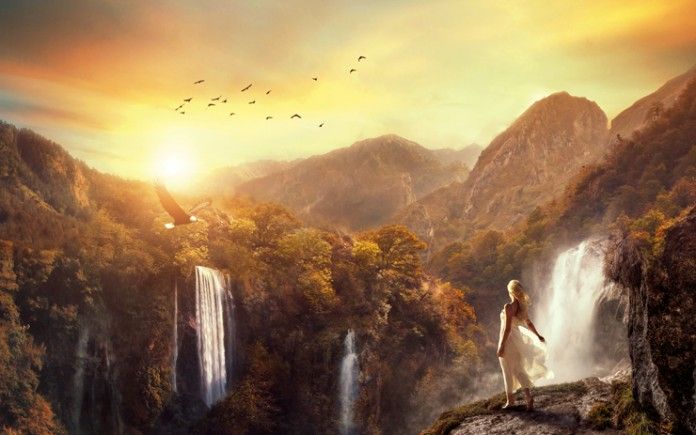 We’ll begin with setting up our basic ambient that includes mountains, waterfalls and sky. Then we’ll select each image to adjust them using adjustment layers. We’ll also add some more stocks such as waterfalls, eagle to the scene using blending techniques. After that we’ll blend model to the scene by creating shadows and using adjustment layers. At the end we’ll create light effects and then finally we’ll finish it up using Final Adjustments layers. Note : that I am using Adobe Photoshop CC 2014 for this tutorial but you can follow it using Photoshop CS3 or newer. 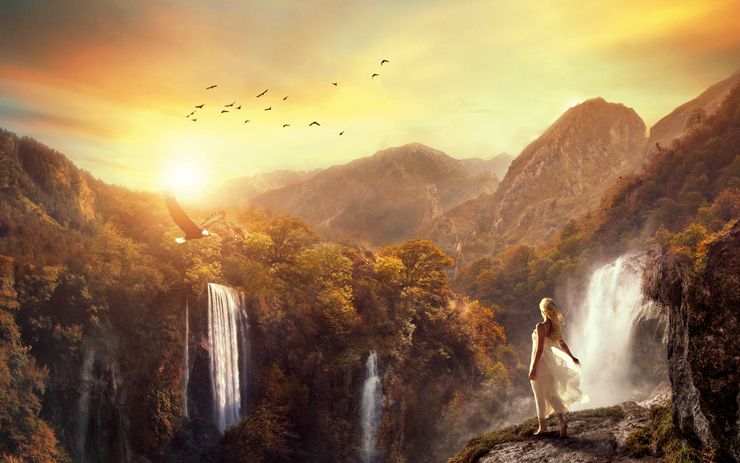 Start by creating a new document by selecting File > New and then set the setting as shown in the image below or feel free to choose your own setting. 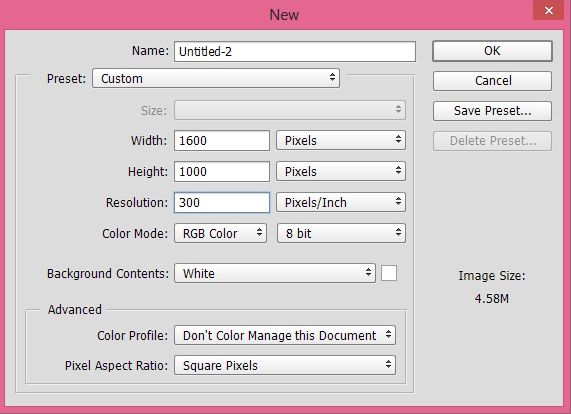 Place the cliff image to the main document by selecting File > Place Embedded or Place. Then place it to the right side of document. 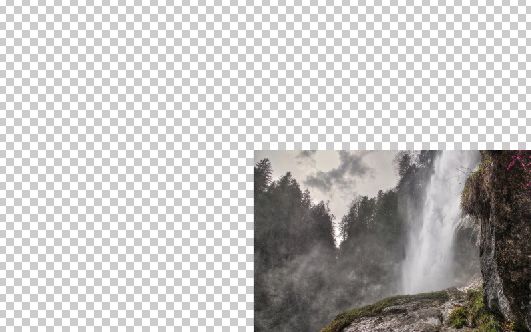 Now place the mountain 1 image under the cliff layer. 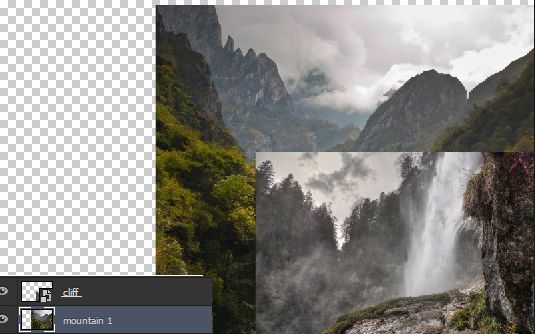 Add a layer mask to cliff layer ( to add layer mask, select Layer > Layer Mask > Reveall All). Activate the Brush tool (B) and set it’s opacity about 30%. Then using a soft round black brush hide the highlighted red parts of cliff image to blend it with mountain 1 layer. 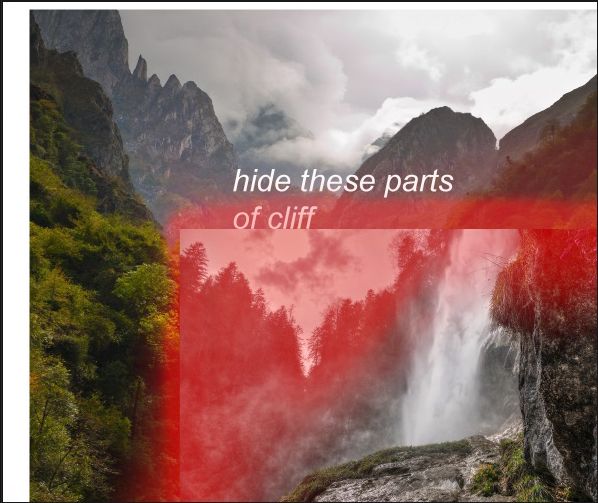 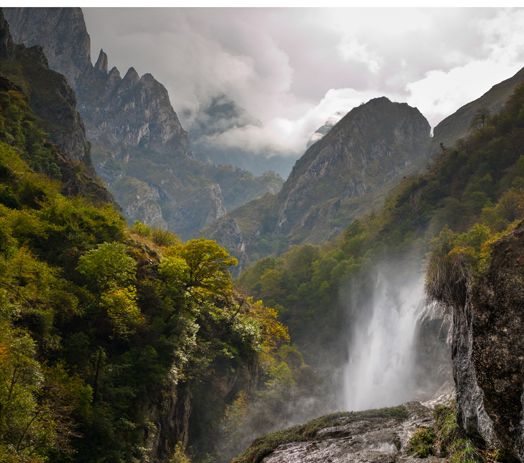 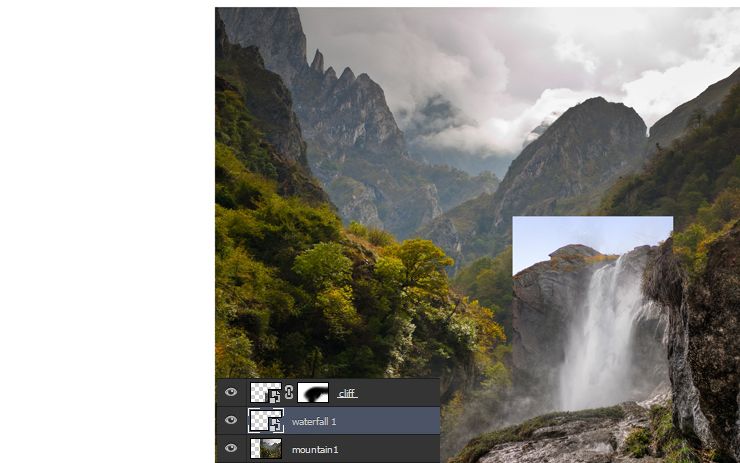 Add layer mask to it and then hide all the parts of waterfall 1 layer except it’s top part (peak) using same brush setting in previous step. Here are the results with added part of waterfall 1 image. 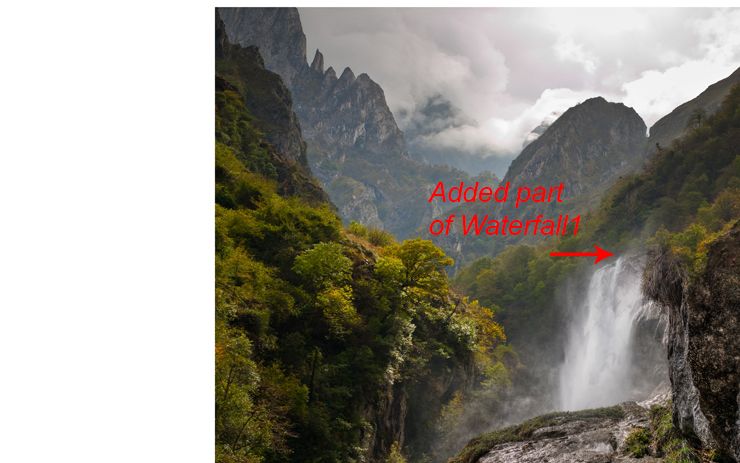 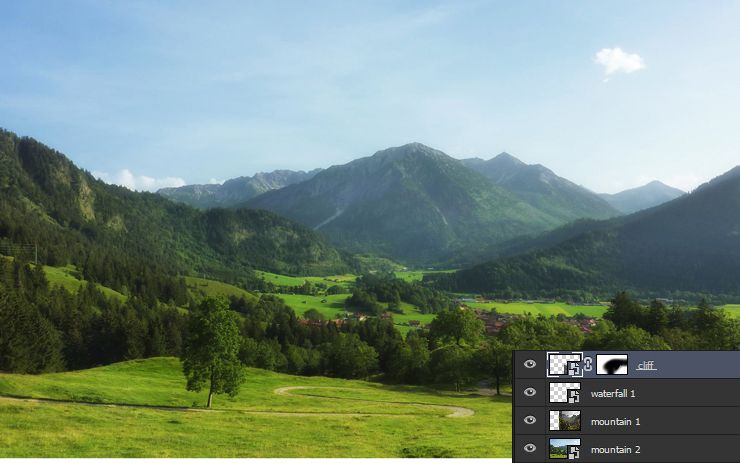 Here are results with all layers. 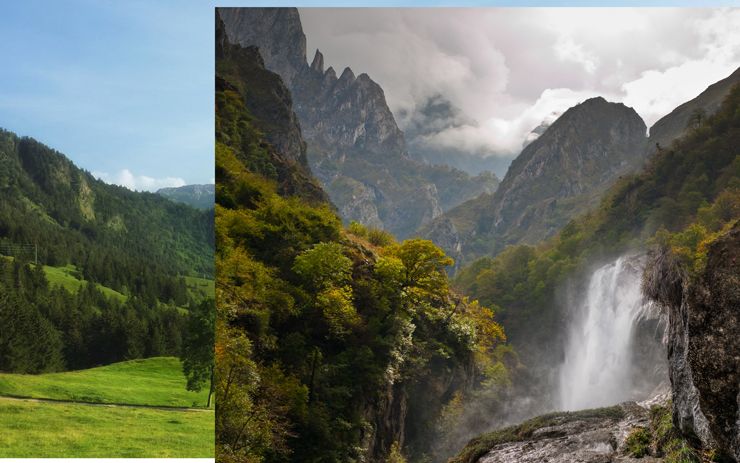 Add a layer mask to mountain 1 layer and using a soft round black brush hide the highlighted red parts of mountain 1. 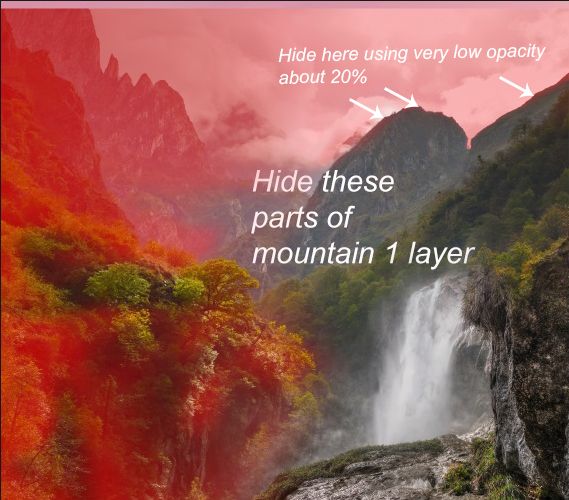 Here are the results. Don’t worry about the rough masking, we’ll blend them in next couples of step. I am leaving some parts because we’ll fill up all the parts using waterfall stocks. If you don’t want to leave them then mask it as well and further you can use the mountain 1 layer below parts when you feel that I need some more parts of mountain 1 layer. 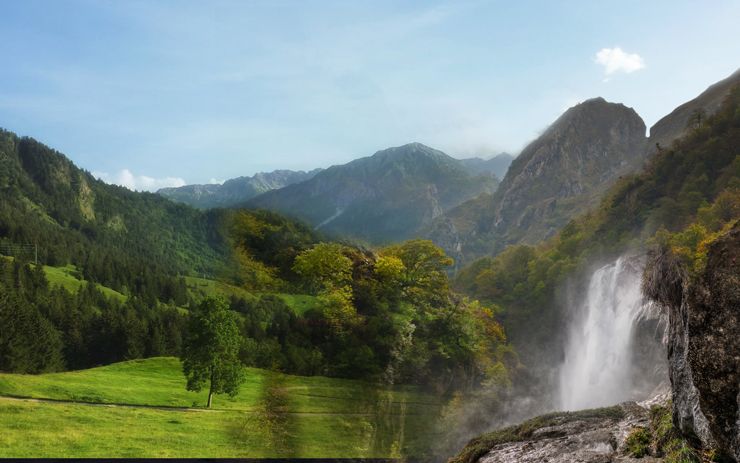 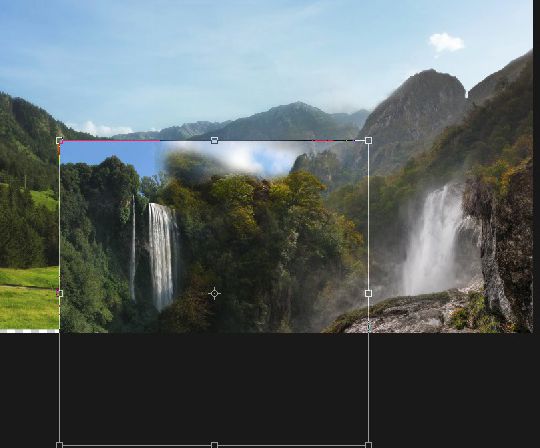 Add layer mask to the mountain 2 layer. Using a soft round black brush hide the highlighted part of waterfall 2 image to blend it properly. 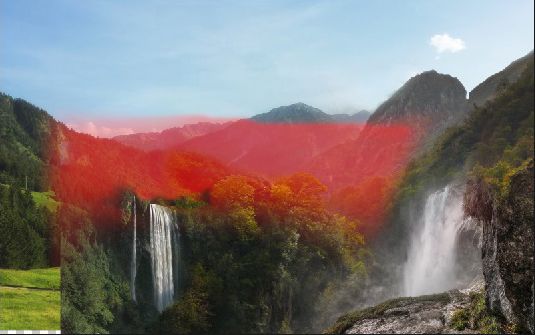 Here are the results 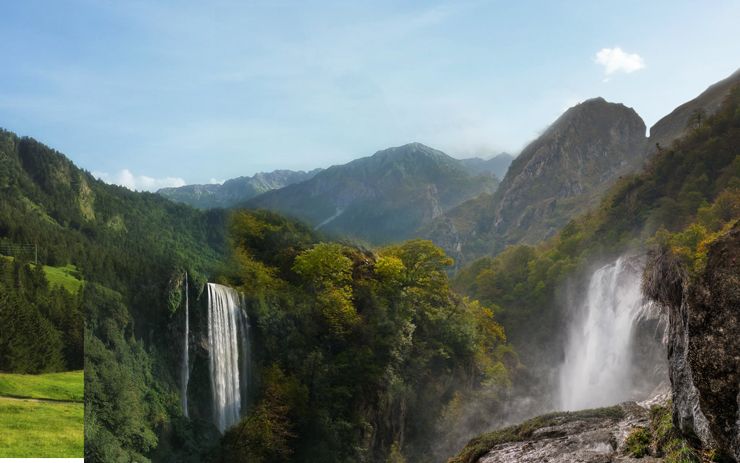 I need some more parts of mountain 1 layer over the waterfall 2 layer to cover it up. To do this, duplicate the mountain 1 layer by pressing (CTRL + J) on keyboard. Move it little bit to left as shown in the image below. 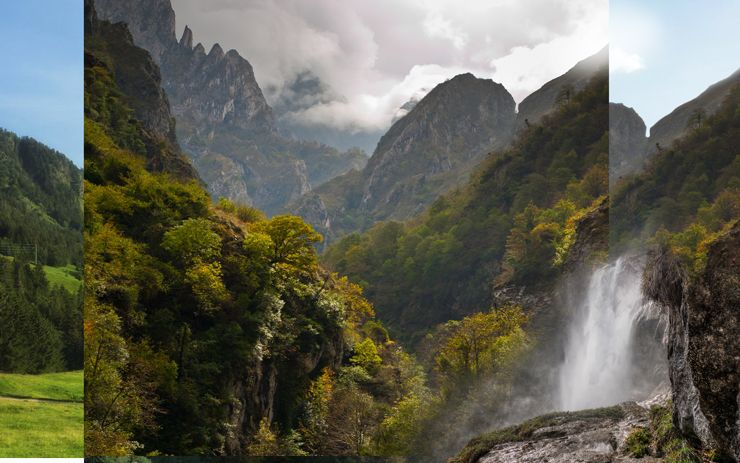 Hide all the parts of mountain 1 layer using layer mask but keep some parts above the waterfall 2. Here you can see that how I covered it over the waterfall 2 layer. 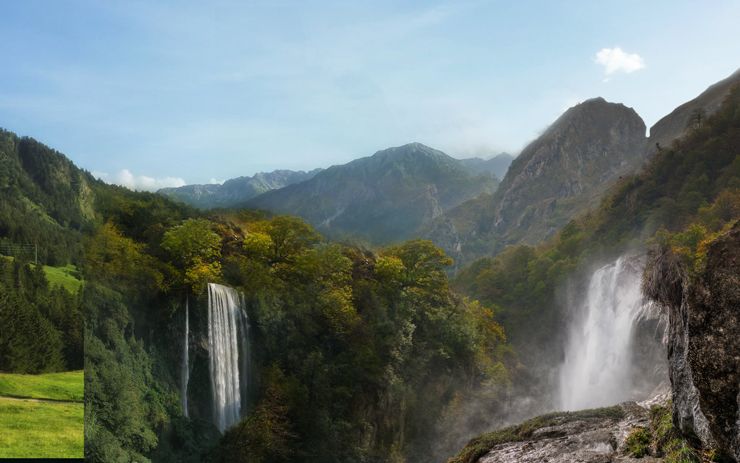 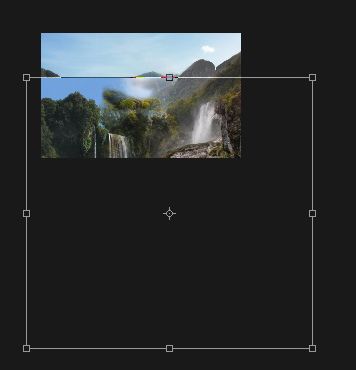 Here you can see how I placed it after transforming it. 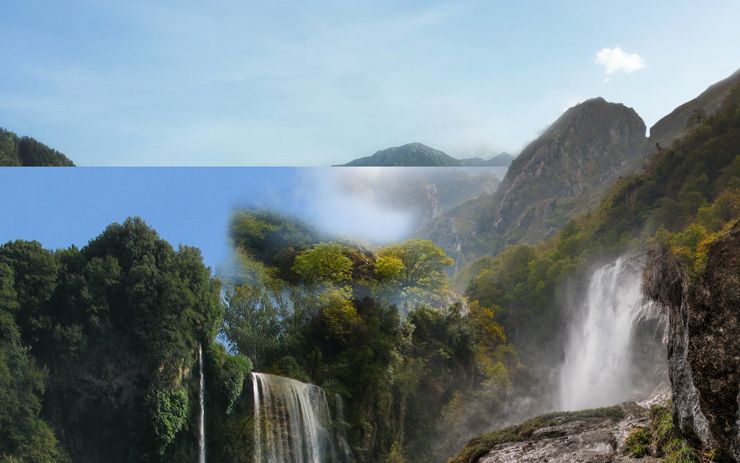 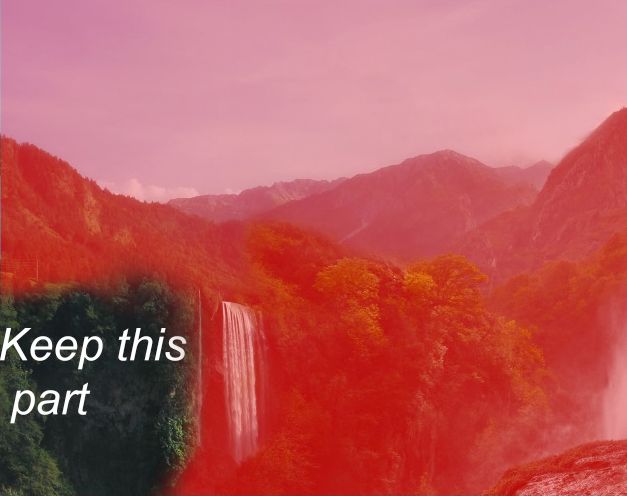 Here are the results after masking. As you can see we’ve very decent blending for all the stock images. 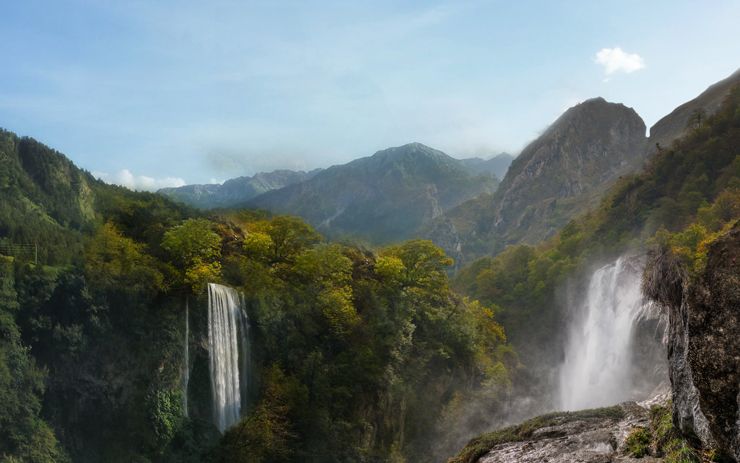 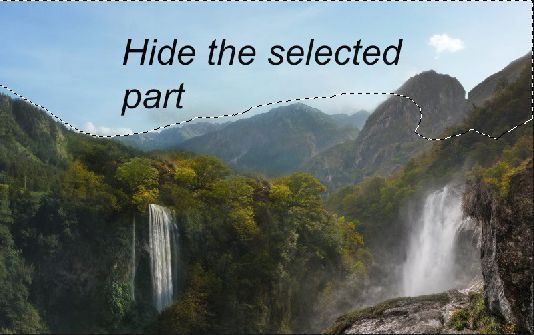 As I said earlier in this tutorial that I’ll give you a quick tip to blend mountains image with another image without getting any hard edges. The trick you’ve already learned in this tutorial (when masking mountain 1 layer) but did you notice that I’ve also hided the edges of mountain 2 layer using very low opacity for brush about 10% to 20%. So I can the blend the mountain 2 image with sky without getting any hard edges otherwise edges of mountain will look sharp and everyone don’t want that. Same thing I’ve done with mountain 1 layer. If you are not good in masking then you can also use the Blur tool to soften the edges. With this technique you can blend any mountain image with another image or with sky image like I am doing it. 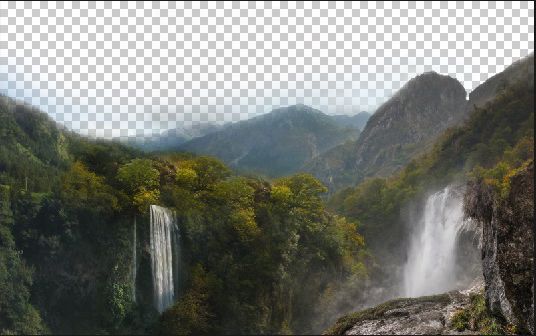 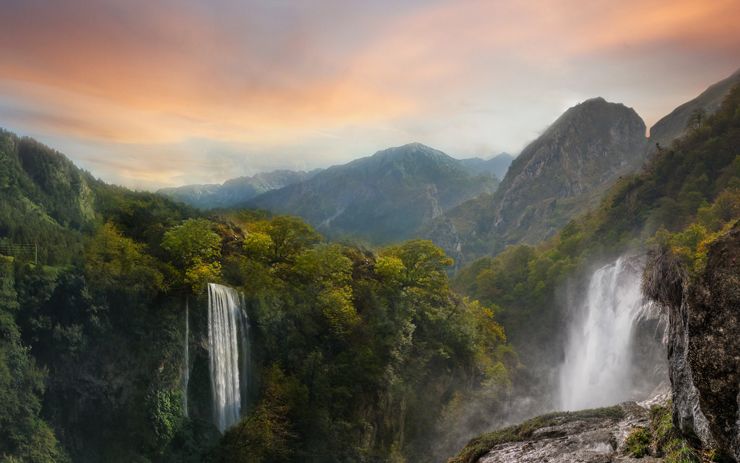 As you can see that the edges of both mountains properly blended with sky image using simple quick tip. 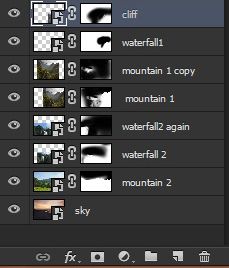 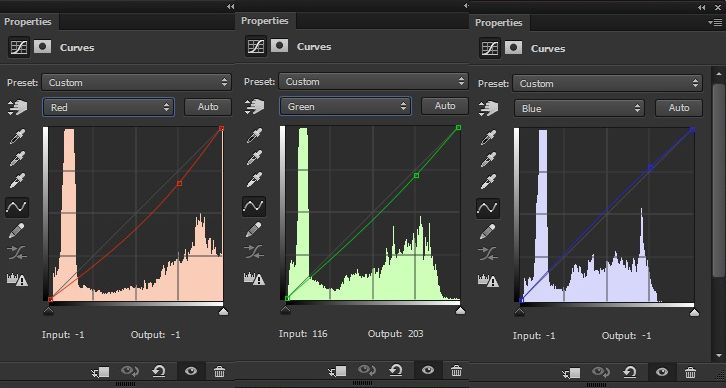 Here are the results with added cyan, green and blue tones. 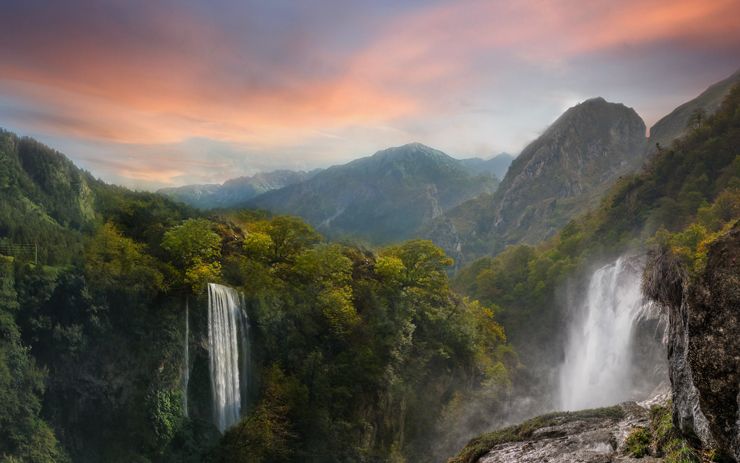 Make a Color Balance adjustment layer to sky and only change the midtones values. Here are the setting. 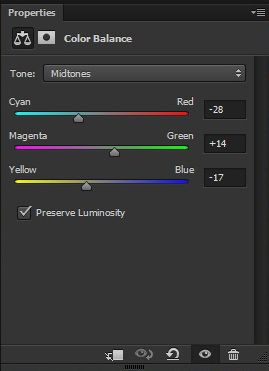 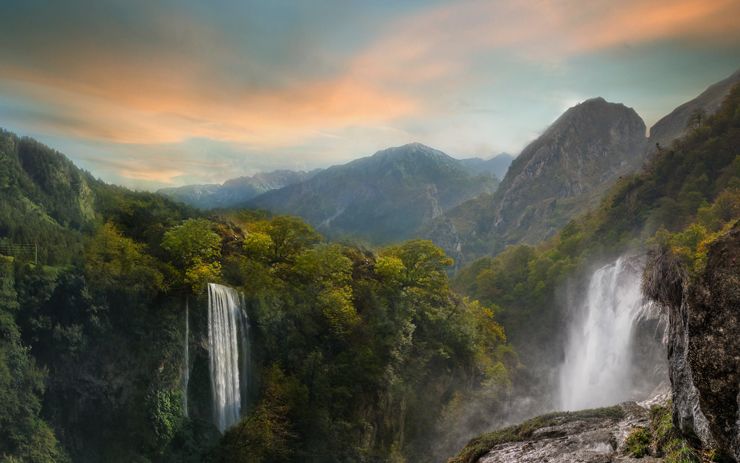