The men and women who are responsible for leading companies and organizations in promoting, acknowledging, and valuing diversity and inclusion in the workplace carry a heavy burden and responsibility. Especially in Silicon Valley.

They wake up, praying as they check their emails and social media feeds, “Dear God, please don’t let one person’s foolishness displayed in a tweet or some manifesto destroy the work we are trying to accomplish.”

They’re often away from their families, speaking and teaching, so that others have an equal chance at getting the same job as their peers.

The men and women in these roles are fighting for work cultures and practices to be built on a foundation of equality and justice in the workplace.

It is because of this call that these men and women answer to that we need to have an honest conversation about Apple, particularly the recent remarks from their new VP of Diversity and Inclusion, Denise Young Smith.

Consider the following Food for Thought:

The Salad: “I focus on everyone.”

Denise Young Smith gave this response when asked if she would focus her attention on any particular group of people (e.g. black women, the LGBTQ community, etc.) as she led Apple in their effort to create a more diverse and inclusive workforce.

“I focus on everyone.”

This is essentially the equivalent to #AllLivesMatter. Now, if you are going to contribute, wrestle with and engage the topic of diversity and inclusion — especially in the world of tech — you need to understand why “I focus on everyone”/#AllLivesMatter is problematic.

#1. Not everyone is battling against systemic and institutionalized biases.

#2. We need to focus on underrepresented groups in tech, because they are more likely to not get a promotion, experience discrimination, and have less opportunities for advancement within their careers because of their skin color, gender, and who they choose to love, date and marry.

#3. Would you go to a breast cancer awareness run and tell everyone, “Hey! All cancers matter!”? No. Because everyone at the run is focusing on breast cancer and you’d be a prick for overlooking the pain and trauma of the lives that have been touched in some way by breast cancer. Likewise, saying “I focus on everyone” or “all lives matter” overlooks the injustices and suffering experienced by millions of people due to systemic and institutionalized racism and biases in tech — especially in Silicon Valley.

Sorry, but if we think we’re going to actually accomplish the hard and messy work of diversity and inclusion by providing simple and shallow answers like, “I focus on everyone,” we’ll never make progress. Never.

The Appetizer: “Diversity is the human experience.”

It’s such a profound and poetic…half-truth.

How most companies implicitly approach increasing diversity in the workplace. 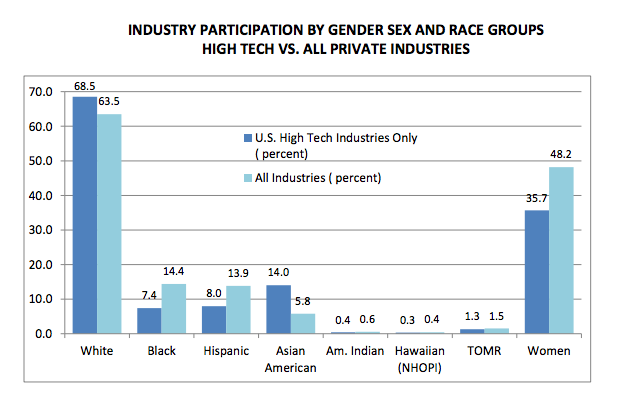 I’m struggling to see the “diversity of human experience” in those stats.

The Entrée: “I get a little bit frustrated when diversity or the term diversity is tagged to the people of color, or the women, or the LGBT.”

The most baffling part of this? Her answer was met with a round of applause.

You get a little bit frustrated when diversity or the term diversity is associated with people who regularly experience discrimination, microaggressions, or harassment in the workplace?

You get a little bit frustrated when diversity or the term diversity is associated with people who have always had to historically fight for the right to be paid, treated, and viewed as equal to white cisgender men?

You, Denise Young Smith, get a little bit frustrated when diversity or the term diversity is associated with people who were dehumanized and targeted in James Damore’s Google memo?

You get a little bit frustrated when diversity or the term diversity is associated with people who have been fired over using a bathroom that aligns with their identity?

You get a little bit frustrated when diversity or the term diversity is associated with people who have to grapple with the increasing amount of hate they feel towards them and their families in this country but then have to put a smile on their face and go to work like everything is fine?

You get a little bit frustrated when diversity or the term diversity is associated with people who have to listen to companies about what they can or cannot do with their bodies?

You get a little bit frustrated when diversity or the term diversity is associated with people who are afraid to transition into their identity at work because they don’t want to be fired or experience harassment?

I’m sorry for your frustration. That must be really difficult for you.

The Dessert: “There can be 12 white, blue-eyed blonde men in a room and they’re going to be diverse too.”

And how did this 12 white, blue-eyed blonde men end up in the same room to begin with? According to Young Smith, diversity is the reason.

It’s easier to ignore systemic and institutionalized biases when you’re getting that Apple money.

You know what else is in that room? White privilege.

I know, I know. There are many people who reject the reality of “white privilege,” often citing how hard their family worked to get to where they are and other events that stunted financial and academic flourishing.

In responding to one of those arguments, Briana Payton in “Dear Privileged-at-Princeton: You. Are. Privileged. And Meritocracy Is a Myth.” clarifies what privilege is with the following:

“Privilege is not an idea aimed at muting opinion or understating the worth of accomplishments. It is not a stab at personal character, nor is it something for which one needs to apologize. But it is also not a myth. Privilege refers to the very real benefits that society affords certain groups over others, and it is manifested in many ways.”

There are men and women who have answered the call to push their companies and organizations when it comes to diversity and inclusion, to have those messy and difficult conversations, to be vulnerable enough to say the unpopular and challenging truths. It’s a part of the job.

Denise Young Smith, you are not excused.