One of the less talked about features of newer browsers is increasing support for the SVG file format. If you are unfamiliar with SVG, it stands for Scalable Vector Graphics. Unlike raster image formats like PNG, JPG or GIF, the vector graphics contained within SVG files are completely scalable to any size and will display at any resolution or screen density without quality loss. In many cases, SVG files will also be much smaller in filesize and download quicker.

But one of the really cool things that some developers do not realize is that SVG is built on the XML specification, which at the end of the day means that its plain old markup, and can be worked with in a similar manner to HTML. It also means that we can access and manipulate graphics and elements within the SVG file using technologies like CSS and JavaScript that web developers are already familiar with.

With the right techniques and modern browser support, developers can now produce some pretty impressive animations, effects and interactions using SVG. Today we will explore the possibilities of SVG and test the capabilities of modern browsers by creating an interactive vector infographic for the web.

There are tons of ways to create SVG graphics, and while it is possible to do some SVG coding “by hand”, for more complex graphics we will want to have some type of vector editing software that can export as SVG. A popular choice of course among designers may be the familiar Adobe Illustrator, but there are other free/open source applications such as Inkscape that in some ways may even be more suited for our purpose.

Whatever software you choose, it is essential to have the ability to group objects together, and be able to name those groups (assign the id attribute). This allows us to organize our SVG into an appropriate hierarchy that we can later access as needed using CSS and/or JavaScript. Both Illustrator and Inkscape have the ability to do so by selecting multiple graphic elements and choosing Object > Group (or Ungroup) from the top menu.

Any object or group can then be assigned a name. This becomes the id attribute of the group or object when exported, so avoid spaces or special characters. Also, avoid duplicates.

In Illustrator, this can be done from the layers palette. Simply navigate to the object you wish to name within the palette, double-click it, and enter the id you wish to use. In Inkscape, use the Object > Object Properties panel to assign an object or group an id. Alternatively, it is possible do so from the Edit > XML Editor panel, which provides even more control of the output and even has the ability to assign classes, not just id’s 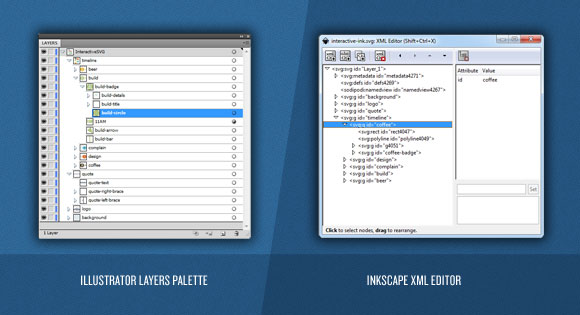 In our example, when we save our SVG and open it in a text editor, it will have the following type of structure:

The markup shown above has been stripped down to simply show the structure we are going for, but it is a good idea to take a few moments to analyze the SVG output of the actual file in a text editor and become familiar with the markup. You will notice a lot of familiar things to HTML, and some new things as well.

As we can see in our SVG markup, each tag indicates a new group of objects, which can be nested inside other groups. Of course, when creating an SVG, it is not necessary to assign an id to every object/group, it simply makes it most convenient to access later via CSS or JavaScript and also easier to recognize when looking at the markup.

There are a number ways to embed or place SVG into HTML. It is possible do it using the tag, the tag, or even by using CSS’ background-image property. For our purpose though, we need access to the actual DOM within our SVG, so we will make use of HTML5′s inline SVG capabilities and load it directly into our page using jQuery.

First, we’ll create a placeholder div in our HTML document:

Then, using jQuery.load, we’ll load the SVG file into our #stage div and give it the class svgLoaded which we’ll later use to trigger our intro animation:

Important: We load the SVG using JavaScript to gain access to its DOM. Chrome (and maybe other browsers) will not let you do this locally; it only works when run from the HTTP protocol for security reasons. So if you are having issues getting the SVG to load, be sure you are testing from a web server or running on localhost

Note that the CSS throughout this tutorial will not contain any browser-specific styles or vendor prefixes, but you will find them in the files.

The key to animating elements within our SVG Canvas lies in the transform-origin property. By default, all transformations to any element in our SVG occur from (0px, 0px) of the SVG canvas. For any element that we wish transform (eg. scale, rotate), we need to set the appropriate transform-origin relative to the top left of the SVG canvas. The origin will be different for each element depending on the desired effect/animation, but in most cases will be equal to the center point of where the element is already positioned. This can be fairly tedious, but simple enough to do by copying the coordinate information provided in our vector editing software.

In the art we created in our vector software, we laid it out showing the “hover” state of each timeline section. So we need to set some initial styles that reposition some things and hide certain objects that we don’t want to show until hovered for interactivity.

To do this we will make use of some advanced CSS selectors. Basically, we’re selecting objects based on their id “suffix” (whatever the id ends with).

Note: In Inkscape it is alternatively possible to assign a class attribute, which would allow CSS selection by class. While it is always possible to add classes into the SVG manually, Illustrator will strip out such foreign attributes on save, meaning no further modifications would be possible.

We select the elements of a hovered group inside the timeline that have the badge,details and title id suffixes, and transform them back to the original position. We then set a nice 0.25s transition for a cool animated effect.

To set up a nice animated intro sequence, we will use some CSS animations. In order to do this, we’ll first need to create some keyframes that will allow us to animate some different CSS properties:

With our keyframe animations now made, we can set up a nice animated intro by simply applying the animations to various elements. Since we only want the intro animation to play when the SVG is first loaded, we can use descendant selectors based on the svgLoaded class that we applied earlier.

Since we have use non-standard fonts within our SVG, we have to include them in our web page in order for them to display properly. When doing this, it is important to get the correct font name that was used when the SVG was exported. We’ll open our SVG file in a text editor and simply find a text node where our font was used and look for the font-family property:

As we can see, the SVG was exported using the font-family name ‘LeagueGothic’. So we simply have to define a webfont in our CSS using that same exact name. This is exactly the same process as using web fonts in any regular HTML page.

And that’s it! I hope you enjoyed this tutorial and found it useful and informative! I’d love to hear your comments about using SVG interactively, and would love to see what other folks come up with too!