In my previous article, we covered some of HTTP’s basics, such as the URL scheme, status codes and request/response headers. With that as our foundation, we will look at the finer aspects of HTTP, like connection handling, authentication and HTTP caching. These topics are fairly extensive, but we’ll cover the most important bits.

A connection must be established between the client and server before they can communicate with each other, and HTTP uses the reliable TCP transport protocol to make this connection. By default, web traffic uses TCP port 80. A TCP stream is broken into IP packets, and it ensures that those packets always arrive in the correct order without fail. HTTP is an application layer protocol over TCP, which is over IP.

HTTPS is a secure version of HTTP, inserting an additional layer between HTTP and TCP called TLS or SSL (Transport Layer Security or Secure Sockets Layer, respectively). HTTPS communicates over port 443 by default, and we will look at HTTPS later in this article.

The server is responsible for always responding with the correct headers and responses.

In HTTP/1.0, all connections were closed after a single transaction. So, if a client wanted to request three separate images from the same server, it made three separate connections to the remote host. As you can see from the above diagram, this can introduce lot of network delays, resulting in a sub-optimal user experience.

Parallel connections, in combination with persistent connections, is today’s answer to minimizing network delays and creating a smooth experience on the client. For an in-depth treatment of HTTP connections, refer to the Connections section of the HTTP spec.

The server mostly listens for incoming connections and processes them when it receives a request. The operations involve:

Of course, this is not an exhaustive list of operations. Most applications/websites need to know who makes a request in order to create more customized responses. This is the realm of identification and authentication.

HTTP is an application layer protocol over TCP, which is over IP.

It is almost mandatory to know who connects to a server for tracking an app’s or site’s usage and the general interaction patterns of users. The premise of identification is to tailor the response in order to provide a personalized experience; naturally, the server must know who a user is in order to provide that functionality.

There are a few different ways a server can collect this information, and most websites use a hybrid of these approaches:

Cookies allow the server to attach arbitrary information for outgoing responses via the Set-Cookie response header. A cookie is set with one or more name=value pairs separated by semicolon (;), as in Set-Cookie: session-id=12345ABC; username=nettuts.

A server can also restrict the cookies to a specific domain and path, and it can make them persistent with an expires value. Cookies are automatically sent by the browser for each request made to a server, and the browser ensures that only the domain– and path-specific cookies are sent in the request. The request header Cookie: name=value [; name2=value2] is used to send these cookies to the server.

The best way to identify a user is to require them to sign up and log in, but implementing this feature requires some effort by the developer, as well as the user.

Techniques like OAuth simplify this type of feature, but it still requires user consent in order to work properly. Authentication plays a large role here, and it is probably the only way to identify and verify the user.

In Basic Authentication, the server initially denies the client’s request with a WWW-Authenticate response header and a 401 Unauthorized status code. On seeing this header, the browser displays a login dialog, prompting for a username and password. This information is sent in a base-64 encoded format in the Authentication request header. The server can now validate the request and allow access if the credentials are valid. Some servers might also send an Authentication-Info header containing additional authentication details.

A corollary to Basic-Authentication is Proxy Authentication. Instead of a web server, the authetication challenge is requested by an intermediate proxy. The proxy sends a Proxy-Authenticate header with a 407 Unauthorized status code. In return, the client is supposed to send the credentials via the Proxy-Authorization request header.

The HTTPS protocol provides a secure connection on the web. The easiest way to know if you are using HTTPS is to check the browser’s address bar. HTTPs’ secure component involves inserting a layer of encryption/decryption between HTTP and TCP. This is the Secure Sockets Layer (SSL) or the improved Transport Layer Security (TLS).

SSL uses a powerful form of encryption using RSA and public-key cryptography. Because secure transactions are so important on the web, a ubiquitous standards-based Public-Key Infrastructure (PKI) effort has been underway for quite sometime.

Existing clients/servers do not have to change the way they handle messages because most of the hard work happens in the SSL layer. Thus, you can develop your web application using Basic Authentication and automatially reap the benefits of SSL by switching to the https:// protocol. However, to make the web application work over HTTPS, you need to have a working digital certificate deployed on the server.

Just as you need ID cards to show your identity, a web server needs a digital certificate to identify itself. Certificates (or “certs”) are issued by a Certificate Authority (CA) and vouch for your identity on the web. The CAs are the guardians of the PKI. The most common form of certificates is the X.509 v3 standard, which contains information, such as:

When a client makes a request over HTTPS, it first tries to locate a certificate on the server. If the cert is found, it attempts to verfiy it against its known list of CAs. If its not one of the listed CAs, it might show a dialog to the user warning about the website’s certficate.

Once the certificate is verified, the SSL handshake is complete and secure transmission is in effect.

It is generally agreed that doing the same work twice is wasteful. This is the guiding principle around the concept of HTTP caching, a fundamental pillar of the HTTP Network Infrastructure. Because most of the operations are over a network, a cache helps save time, cost and bandwidth, as well as provide an improved experience on the web.

Caches are used at several places in the network infrastructure, from the browser to the origin server. Depending on where it is located, a cache can be categorized as: 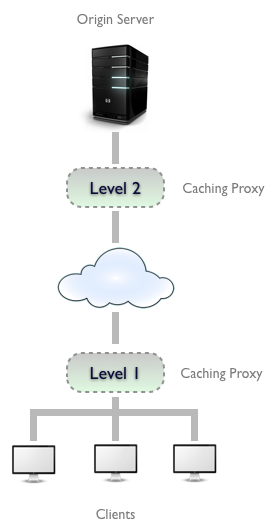 Regardless of where a cache is located, the process of maintaining a cache is quite similar:

Of course, the server is responsible for always responding with the correct headers and responses. If a document hasn’t changed, the server should respond with a 304 Not Modified. If the cached copy has expired, it should generate a new response with updated response headers and return with a 200 OK. If the resource is deleted, it should come back with 404 Not Found. These responses help tune the cache and ensure that stale content is not kept for too long.

Now that we have a sense of how a cache works, it’s time to look at the request and response headers that enable the caching infrastructure. Keeping the content fresh and up-to-date is one of the primary responsibilities of the cache. To keep the cached copy consistent with the server, HTTP provides some simple mechanisms, namely Document Expiration and Server Revalidation.

HTTP allows an origin-server to attach an expiration date to each document using the Cache-Control and Expires response headers. This helps the client and other cache servers know how long a document is valid and fresh. The cache can serve the copy as long as the age of the document is within the expiration date. Once a document expires, the cache must check with the server for a newer copy and update its local copy accordingly.

Expires is an older HTTP/1.0 response header that specifies the value as an absolute date. This is only useful if the server clocks are in sync with the client, which is a terrible assumption to make. This header is less useful compared to the newer Cache-Control: max-age=<s> header introduced in HTTP/1.1. Here, max-age is a relative age, specified in seconds, from the time the response was created. Thus if a document should expire after one day, the expiration header should be Cache-Control: max-age=86400.

Once a cached document expires, the cache must revalidate with the server to check if the document has changed. This is called server revalidation and serves as a querying mechanism for the stale-ness of a document. Just because a cached copy has expired doesn’t mean that the server actually has newer content. Revalidation is just a means of ensuring that the cache stays fresh. Because of the expiration time (as specified in a previous server response), the cache doesn’t have to check with the server for every single request, thus saving bandwidth, time and reducing the network traffic.

The combination of document expiration and server revalidation is a very effective mechanism, it and allows distributed systems to maintain copies with an expiration date.

If the content is known to frequently change, the expiration time can be reduced—allowing the systems to re-sync more frequently.

The revalidation step can be accomplished with two kinds of request-headers: If-Modified-Since and If-None-Match. The former is for date-based validation while the latter uses Entity-Tags (ETags), a hash of the content. These headers use date or ETag values obtained from a previous server response. In case of If-Modified-Since, the Last-Modified response header is used; for If-None-Match, it is the ETag response header.

The validity period for a document should be defined by the server generating the document. If it’s a newspaper website, the homepage should expire after a day (or sometimes even every hour!). HTTP provides the Cache-Control and Expires response headers to set the expiration on documents. As mentioned earlier, Expires is based on absolute dates and not a reliable solution for controlling cache.

The Cache-Control header is far more useful and has a few different values to constrain how clients should be caching the response:

As an aside, if the server does not send any Cache-Control headers, the client is free to use its own heuristic expiration algorithm to determine freshness.

Constraining Freshness from the Client

Cachability is not just limited to the server. It can also be specified from the client. This allows the client to impose constraints on what it is willing to accept. This is possible via the same Cache-Control header, albeit with a few different values:

HTTP Caching is actually a very interesting topic, and there are some very sophisticated algorithms to manage cached content. For a deeper look into this topic, refer to the Caching section of the HTTP spec.

Our tour of HTTP began with the foundation of URL schemes, status codes and request/response headers. Building upon those concepts, we looked at some of the finer areas of HTTP, such as connection handling, identification and authentication and caching. I am hopeful that this tour has given you a good taste for the breadth of HTTP and enough pointers to further explore this protocol.