Mac OS X is definitely one of, if not the most, consistent and aesthetically pleasing desktop OS on the market to date but in order to use it, you still need to get a Mac. If you work on a Windows PC and don’t want to build a Hackintosh, you can try this alternative: Elementary OS Luna. 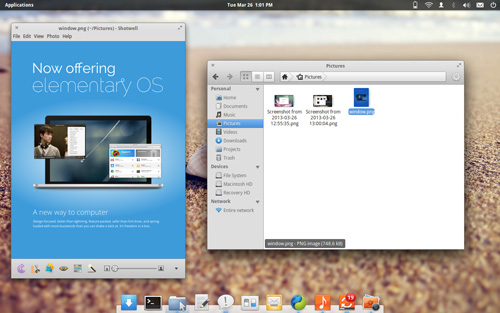 The Elementary OS team was motivated by a "desire to create a Linux-based OS that championed consistency and great design", and their design ethos focuses on providing a concise and consistent user experience with minimal need for configuration and documentation. For us, Elementary OS is as close to a Mac OS as you can get on a PC.

Recommended Reading: 9 Cloud Operating System You Can Try Out For Free

Like Ubuntu and its derivatives, Elementary OS Luna is packaged as a live distro. In other words, you can burn it onto a CDr (or create a bootable thumb drive) and boot directly from it for a trial run. 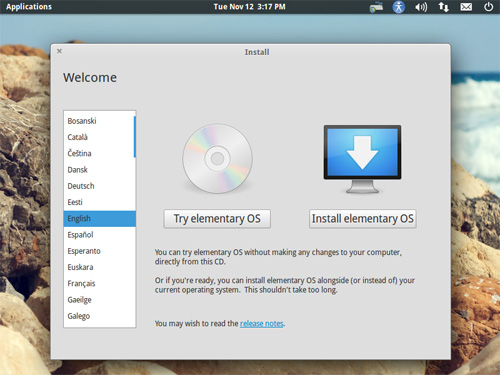 If you find that you like it, and want to install it, run the Ubiquity installer from the dock and follow the step-by-step installation process. 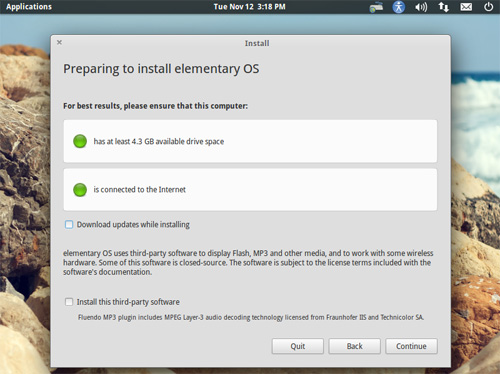 The first thing you’ll notice when you boot into Elementary OS Luna is its user interface. Luna uses an in-house desktop environment called Pantheon, and at first glance it’s impossible to overlook its similarities to Mac OS X.

From the dock, to the top bar, to the subtle gradients and monochrome window design, it’s clear that Mac OS X was a big influence on the Elementary OS team’s design philosophy. 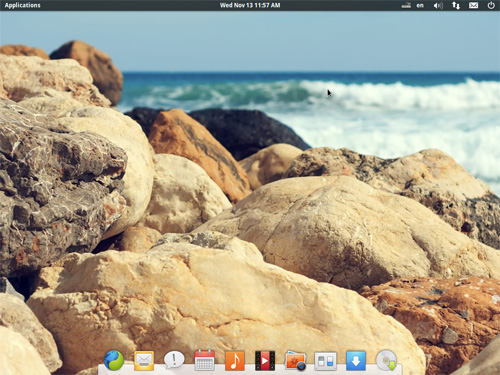 However, while the visual similarities are remarkable, they’re mostly skin deep. Elementary OS Luna is still a Linux distro at heart.

Elementary OS Luna’s application launcher is called Slingshot, and is accessible from the left of the top panel. Slingshot can display installed applications as both unsorted and categorised grids. 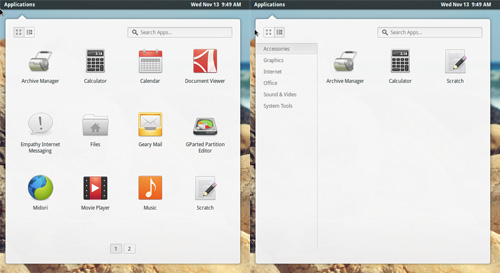 The top bar itself is called Wingpanel. Wingpanel is as minimalistic as they come: the aforementioned application launcher on the left, a clock in the middle, and power and connectivity options to the right. Of course, Wingpanel will show icons if apps require it, but it’s fundamentally a minimalist and clean top panel. 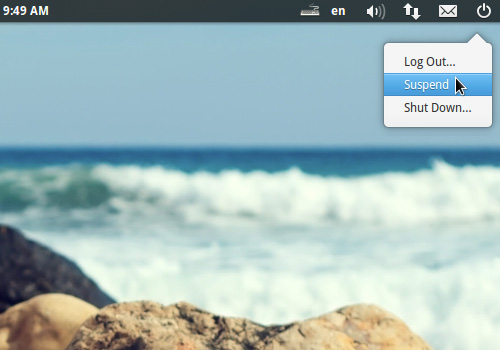 The Elementary OS Luna dock, codenamed Plank, works exactly like the dock you get in OS X. Plank, like OS X’s dock, highlights the application currently in focus, and has indicators to tell you which apps are currently open.

In keeping with the Elementary OS ethos, Plank fulfills its role adequately, without extraneous customization and configuration options.

Pantheon also has support for Hot Corners and Workspaces. In addition, you also have access to window and workspace overview screens.

Hot Corners allow you to execute commands such as triggering the workspace overview screen or opening Slingshot when your cursor enters one of the display’s corners. This feature is not enabled by default, but can be, in the Desktop section within the System Settings application. 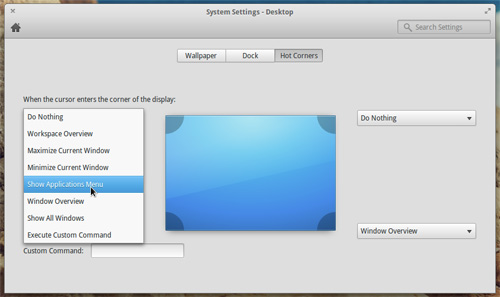 All in all, Elementary OS Luna’s user interface is a delight to use. It looks great, is smooth and responsive, and manages to be minimal without being too bare bones.

The Elementary OS team’s focus on minimalism extends beyond Luna’s user interface. Elementary OS Luna comes with only the most basic applications pre-installed.

Amongst these applications are: 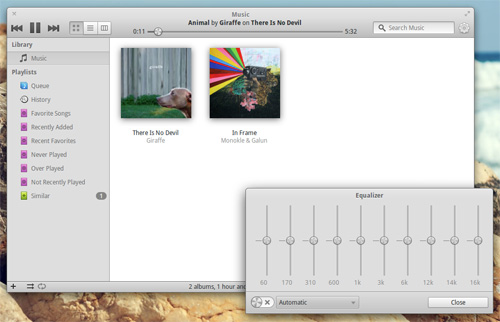 Much like Mac OS applications, these pre-installed applications save upon exit and will restore to state when they’re relaunched.

Elementary OS Luna also comes with the requisite software center, system settings (Switchboard) and file manager (Pantheon Files) applications. It doesn’t, however, include an office suite such as LibreOffice. This might seem overly minimal, but it keeps to the design ethos: concise, consistent and minimal.

Users with more specific needs will have to turn to the Software Center. Since Luna is based on Ubuntu, there’s a large number of applications to choose from that should fulfill any user’s needs.

Pantheon Files doesn’t even have a dedicated Settings menu. This doesn’t mean that it’s light on functionality, though. With Pantheon Files, you’re given a choice between three different views (List, Grid and Column) and the ability to Show Hidden Files from the right-click menu. 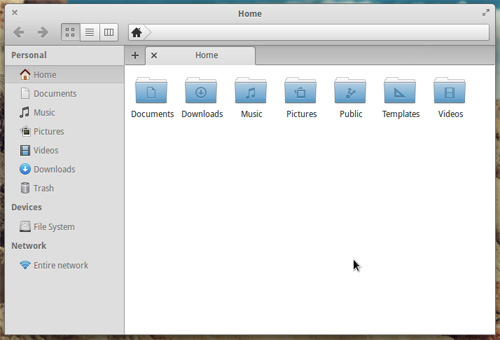 You also have contextual options such as Compress, Print and Send files via Bluetooth in the same right-click menu. These options sit alongside the usual commands for moving and deleting files. The side panel can also be disabled if you wish. 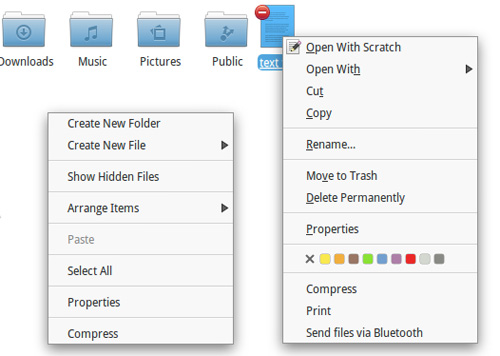 One of the downsides of Elementary OS Luna’s focus on a concise and consistent user interface is a lack of out-of-the-box customization options. There’s barely anything you can do to customize Plank or Pantheon Files, for example.

Elementary OS Luna doesn’t have theme support built-in, either. However, you can get access to these options and more by installing Elementary Tweaks. 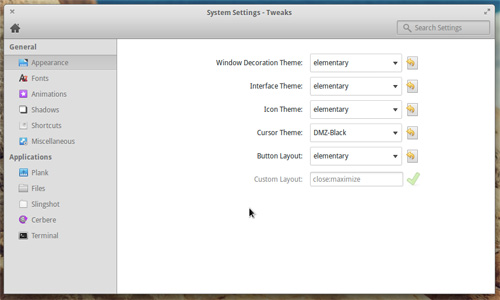 Elementary OS Luna succeeds at providing something that other Linux distros often struggle with: consistent design and user experience across the board — but only with the pre-installed applications.

In addition, it’s possible that Elementary OS Luna will just be too minimal for some users. The fact that it doesn’t come with an office suite or security features such as a built-in firewall may prove to be a problem. To cope, users may have to download Ubuntu applications that, as mentioned, will dilute the very thing that makes Elementary OS Luna stand out: its consistency.

On the whole, though, Elementary OS Luna is a good Linux distro that will definitely appeal to users looking for a stable and smooth OS that manages to provide some of Mac OS X’s visual polish and consistent user experience.