When Tim Berners-Lee gave us the WorldWideWeb in 1990, it was the first and only web browser. But it didn’t remain alone for long.

Even in those early days of the web, there was plenty of competition for web browser market share: Mosaic, MidasWWW, SlipKnot, Arena, Netscape, and Internet Explorer emerged around that time, too, and duked it out for the top spot for the better part of a decade.

So, if there’s always been a battle of the browsers, why do we care so much about how many browsers are available today? You’d think it wouldn’t matter much. After all, browsers are nothing more than a shell through which we access the web, right? Superficially, that’s true. As consumers, browsers provide us with key navigational elements that help us move around the web: the home button, address bar, back and forward buttons, bookmarks, and more.

As designers and developers, though, you understand that browsers play a bigger role in the user experience than just what users can see at the top of their screen. With various rendering engines used to interpret and display code, we see varying results in how browsers show our websites to their users. As such, it’s a worthwhile question to ask: Would we be better off if there were only one browser?

The State of Web Browsers Today

There was a time when Internet Explorer was the reigning champ of browsers. However, it failed to prioritize the user experience and to adhere to web standards put in place for that very purpose. It was this failure that ultimately opened the door for other browsers to usurp IE from the lofty position it sat upon for years. 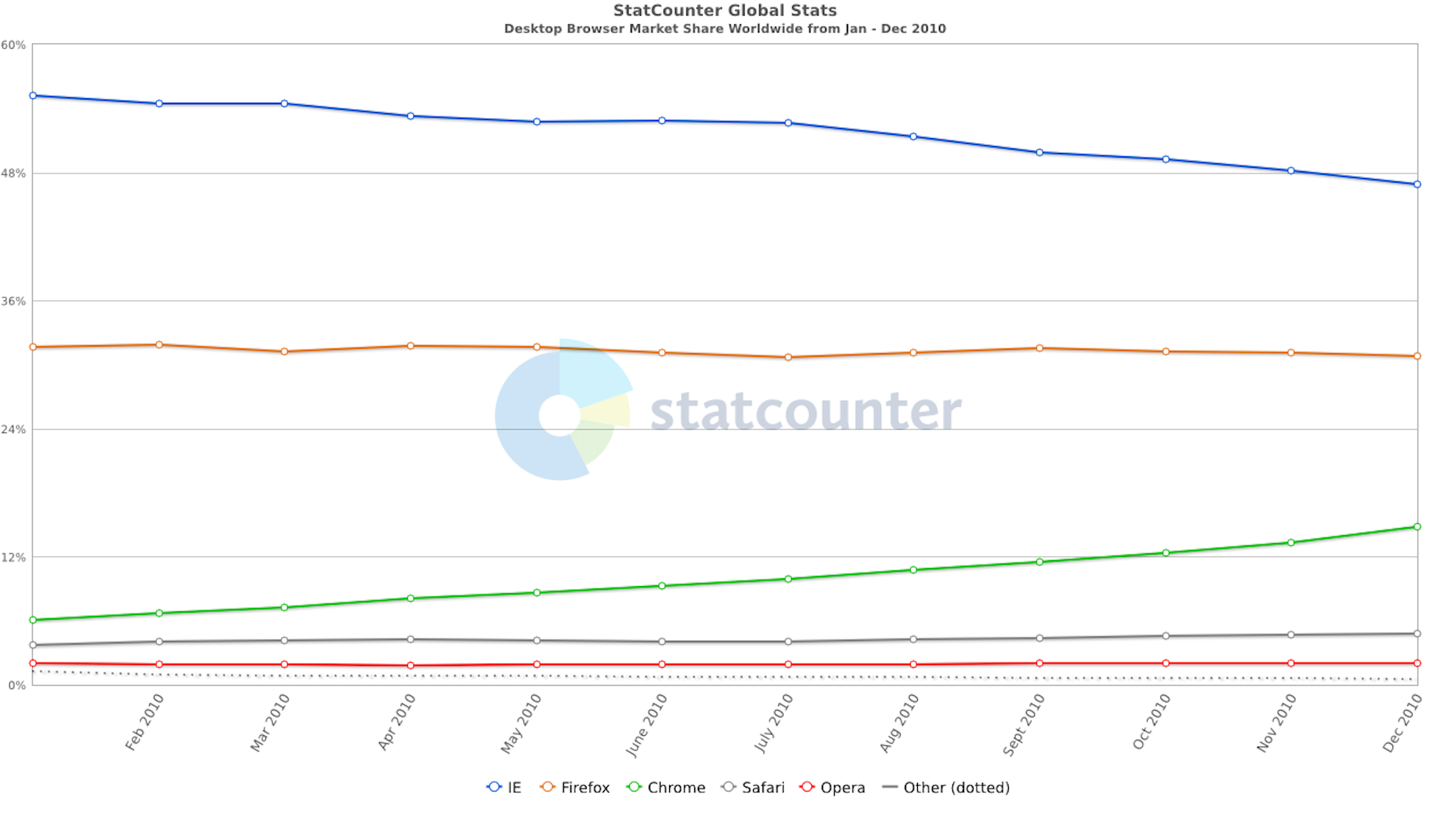 As you can see, IE was quickly losing popularity to Firefox, which provided a much better (i.e. less intrusive) browsing experience for its users.

What’s interesting to note, though, is that Firefox didn’t remain the frontrunner for long. Just a year later, Chrome surpassed Firefox in terms of market share. 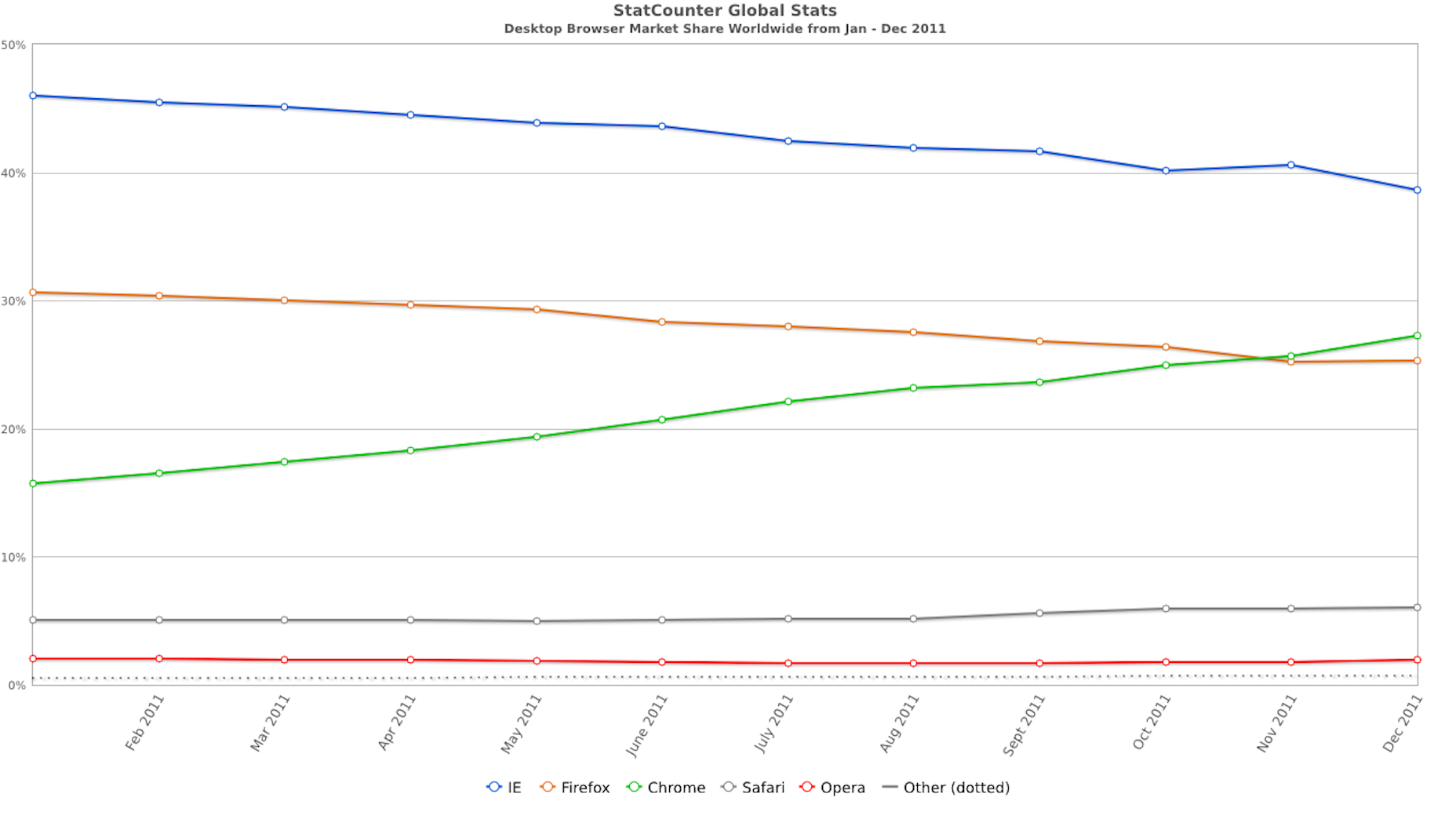 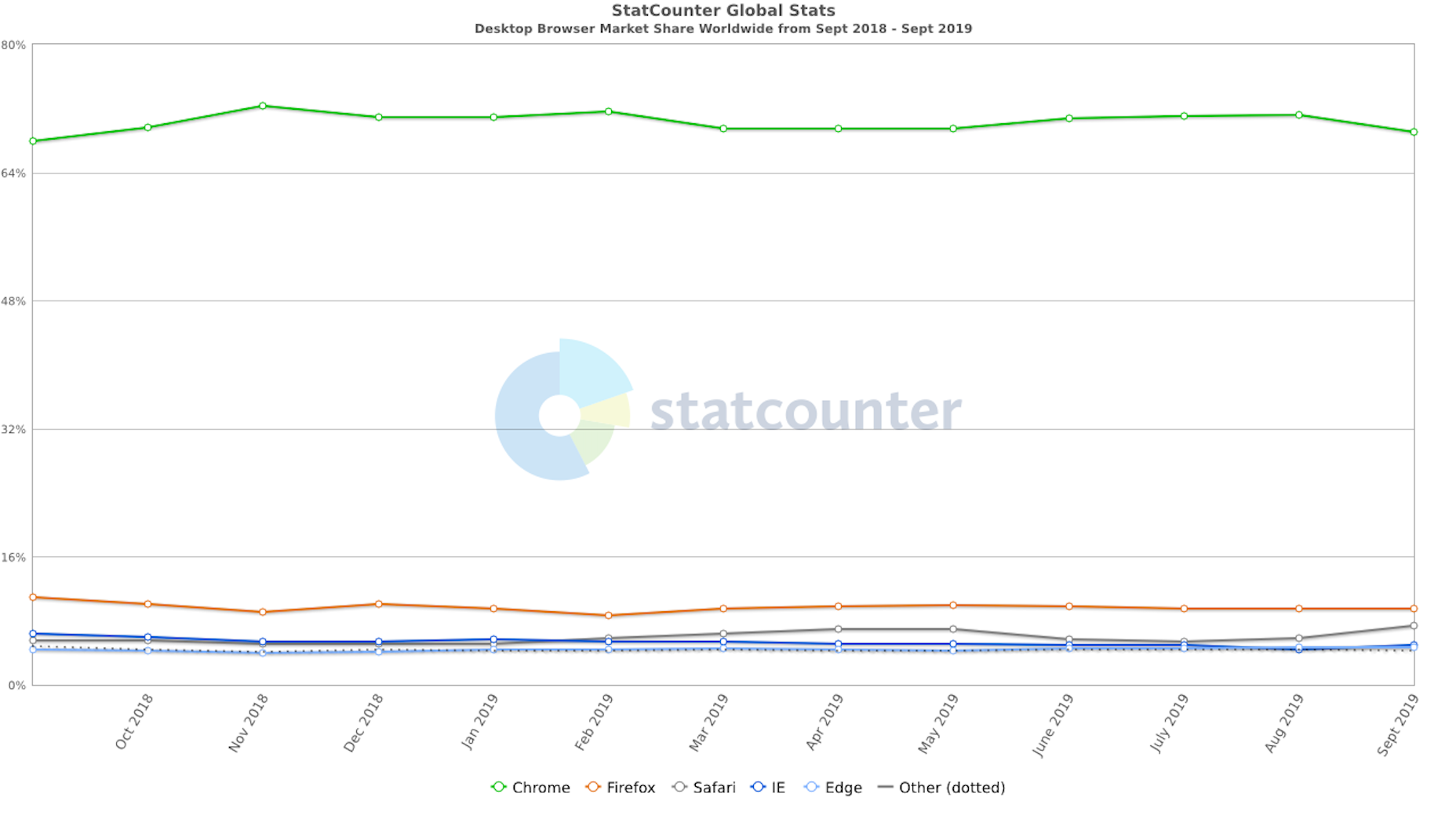 It’s a totally different picture. Chrome owns the majority market share and there are no major waves detected in the market. Everyone’s browser preferences seem to be holding steady.

Even when we throw mobile browsers into the mix, the same holds true. 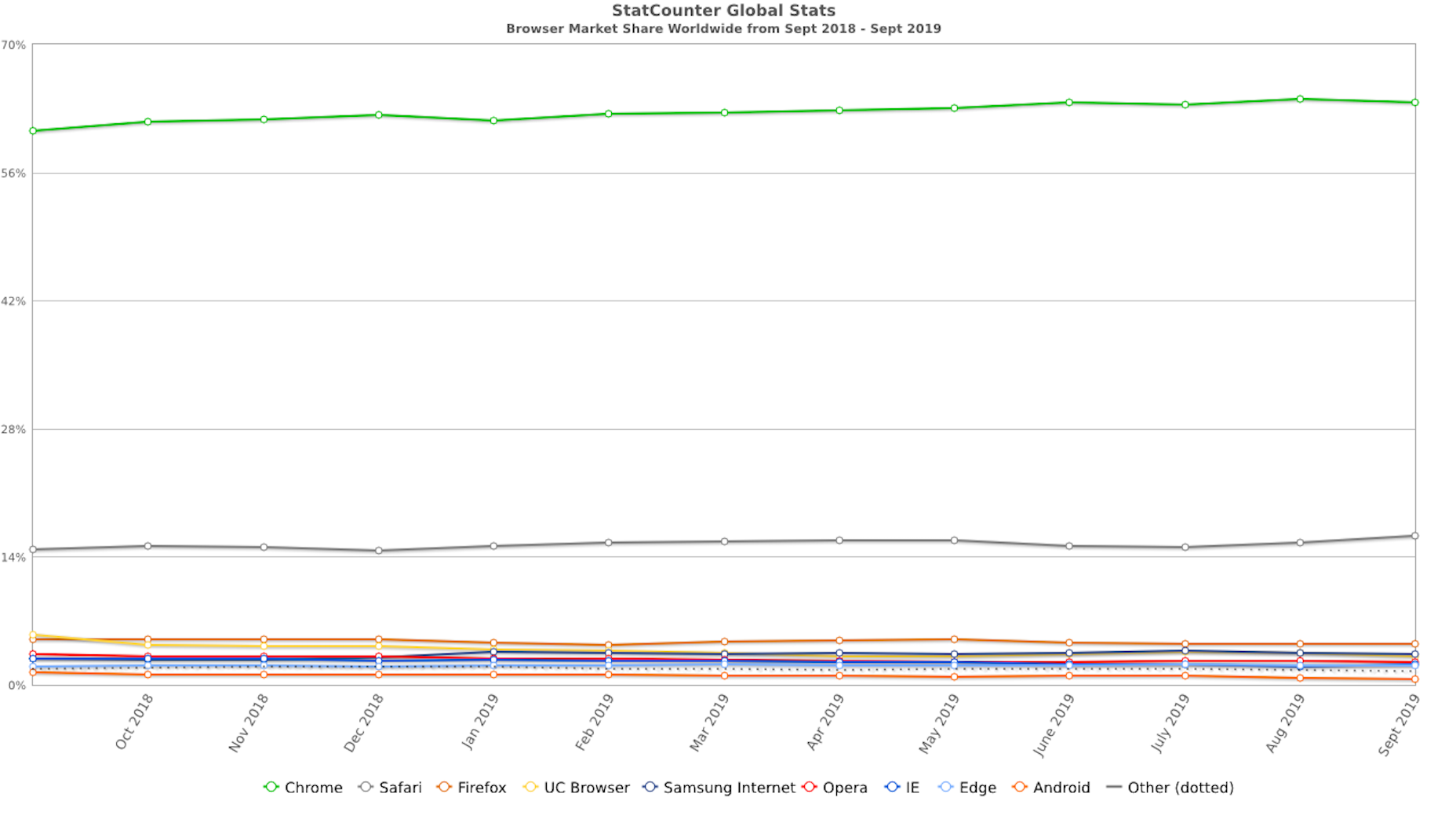 Notice how Chrome’s percentage share shrinks slightly, from 69.08% to 63.72%. That’s thanks to Safari, which cuts a bit deeper into Google’s share on mobile: 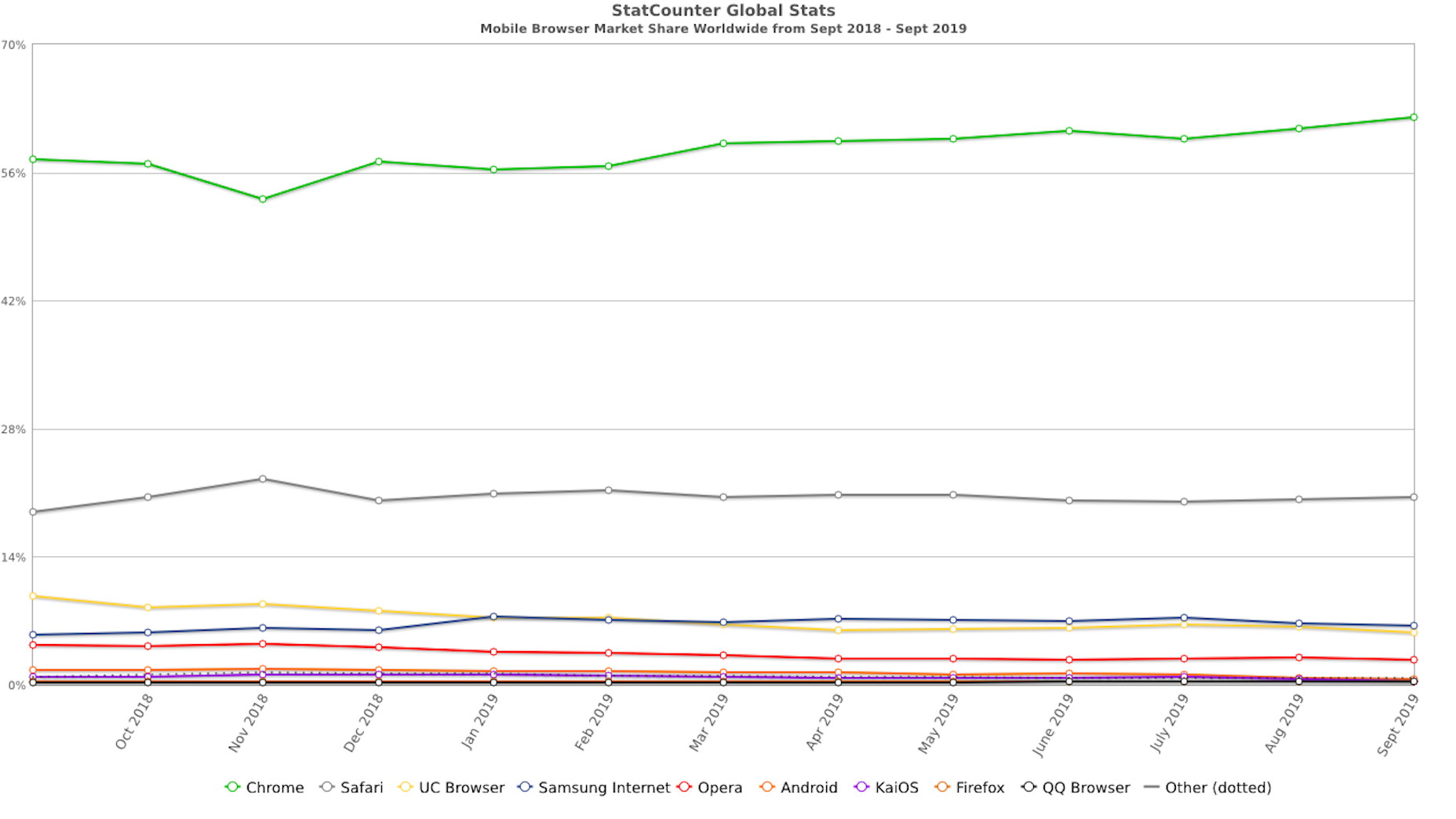 Even so, it’s clear that Chrome is an untouchable force when it comes to browsers. So, why don’t the others give up and just let Chrome run it all? Wouldn’t it be a better experience for users and, by consequence, make it easier for designers and developers to build for the web?

Is One Browser the Solution?

This is a tricky question to answer. Because if we’re being honest with ourselves, there’s really only one browser that we realistically could default to without the entirety of the web going bonkers: Chrome. 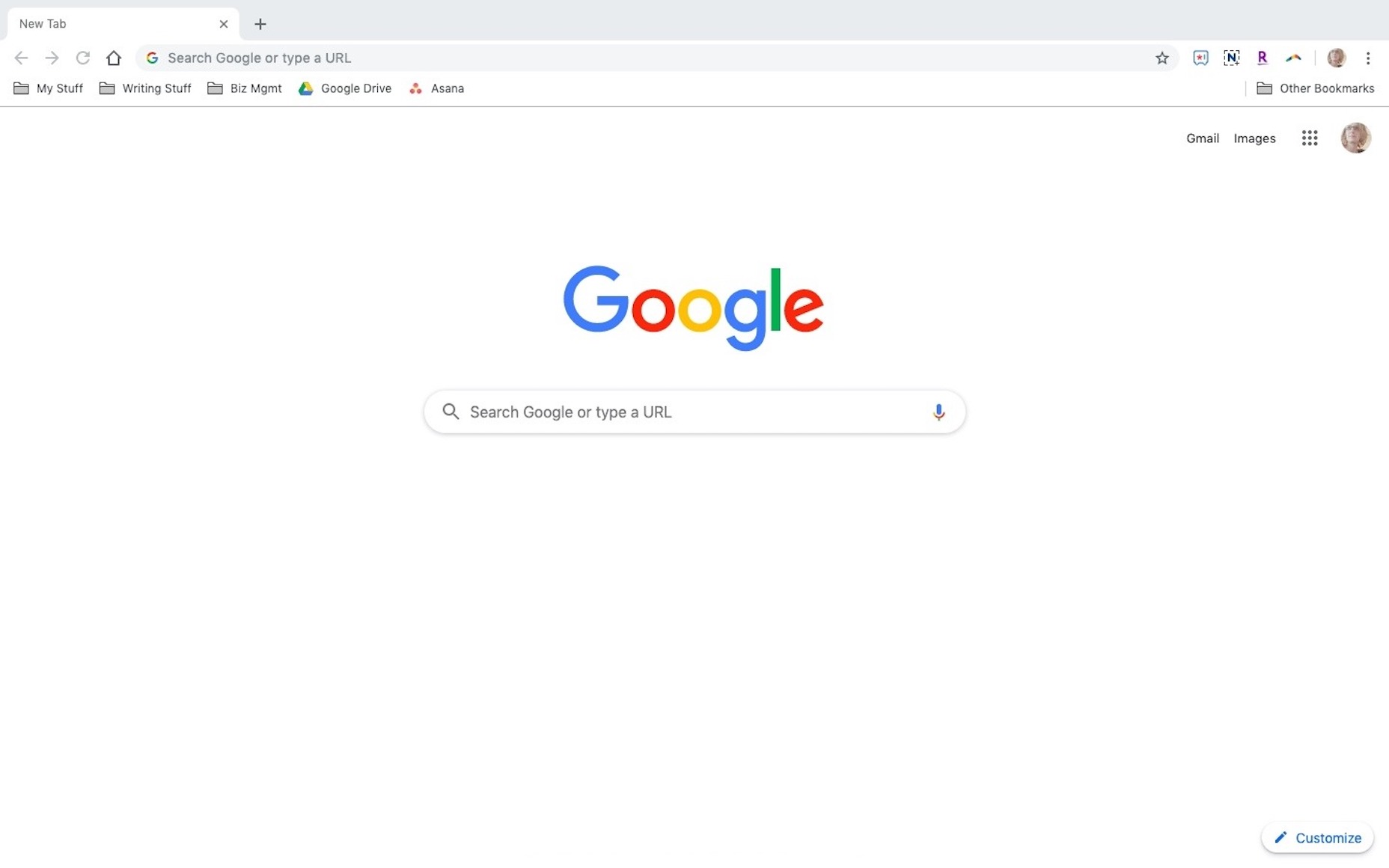 That said, there are some (albeit legit) concerns that will probably keep that from happening.

Google is the entity behind Chrome and Chromium, the open source project that helps others create better browsing experiences. Browsers like Opera, Brave, and Vivaldi have been built with Chromium. Even Microsoft’s own browser, Edge, is getting a makeover with Chromium.

While it’s great that Google’s doing its part to bring order and stability to the web, that doesn’t negate the fact that there are serious privacy concerns when it comes to the Chrome browsing experience.

There’s the issue with cookies, for starters. Some web browsers have gone so far as to block websites from using cookies, by default. Google, on the other hand, leaves this to its users to configure on their own. Granted, the passing of GDPR has brought more awareness to the issue of privacy and cookie tracking on the web. But in terms of getting support from the leading browser, consumers aren’t going to get much there.

Then, there’s the matter of how much tracking Google is doing on its own. After all, if someone is using Chrome, that means they’re using other Google products as well. So, how much data is Google collecting as it watches its users go from its email platform to Google Drive to its search engine and so on? Probably a lot. Which will only strengthen the monopoly it has over the web.

Google has demonstrated that it doesn’t always have others’ interests in mind when it passes down big decisions. And that’s something that consumers and companies alike should be concerned with.

For instance, there’s the recent news about what Google wants to do to the Web Request API; specifically, how it relates to ad-blocking extensions.

Its reason for this? It says it’s moving its Chrome extensions to the Declarative Net Request API in order to improve user privacy. Some suspect, however, that Google wants to introduce its own API in order to cripple ad-blockers (which obviously impact its own ability to generate revenue through ads).

There are also assertions that Google edges out products it doesn’t like (including competing browsers) using less-than-reputable means. For example, the former CTO at Mozilla, Andreas Gal, told Bloomberg:

“There were dozens and dozens of ‘oopsies,’ where Google ships something and, ‘oops,’ it doesn’t work in Firefox. They say oh we’re going to fix it right away, in two months, and in the meantime every time the user goes to these sites, they think, ‘oh, Firefox is broken.’’

It’s not just the big competitors that Google has edged out either. The same article reports that developer Samuel Maddock had a similar experience. After building a browser using Chromium, Google refused to give him permission to use one of their products to complete it. When he sought out a reason for the rejection, there was none given.

When you look at the history of web browsers, you’ll see that it’s not just the leading options that have improved the browsing experience.

Take Opera, for instance, which was responsible for giving us browser tabs, thumbnail speed dial, and mouse gestures. Even if it’s never held a large share of the browser market, it’s still been a major innovative force, and one that the big players have had no problem copying. 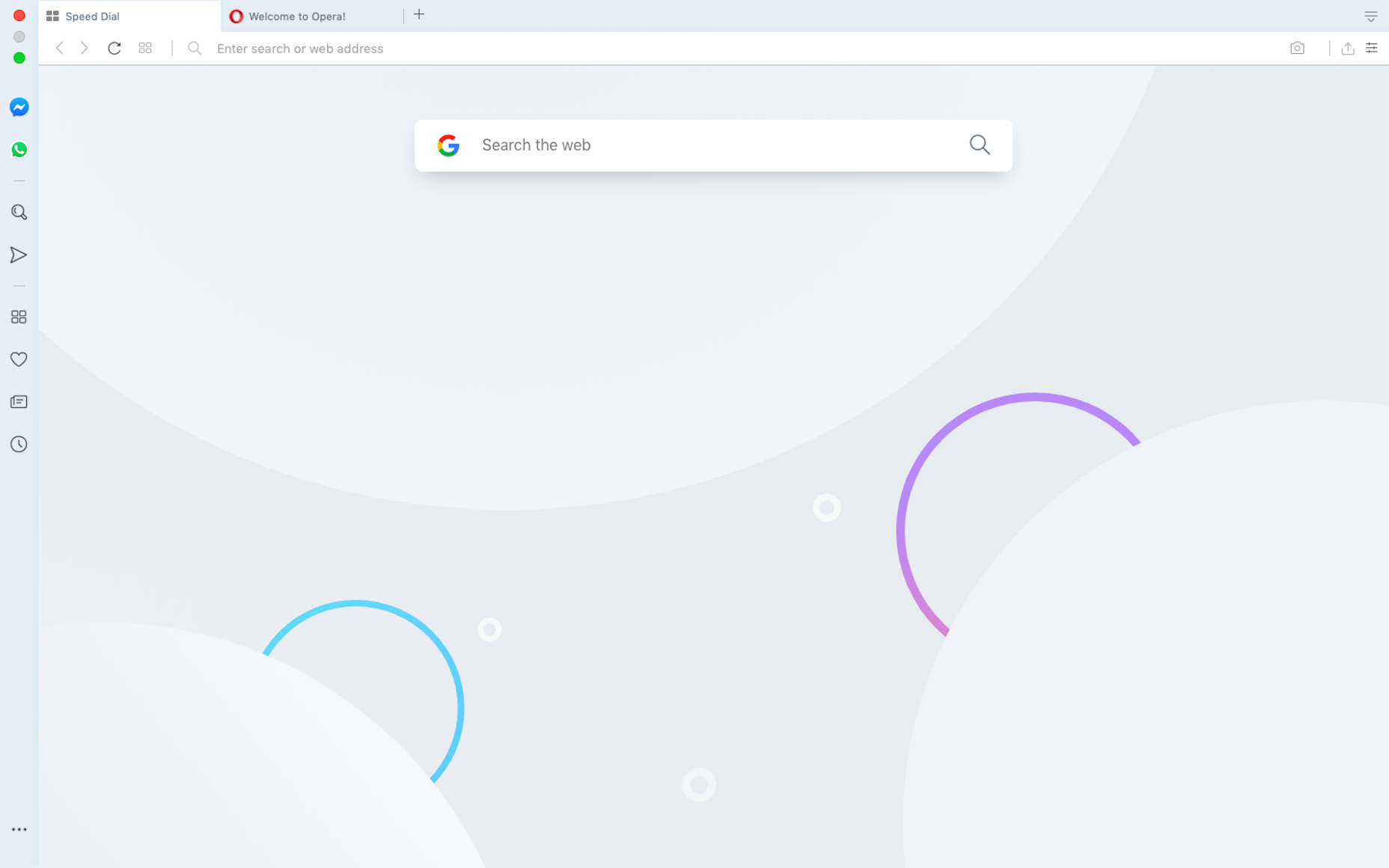 Which leads me to wonder: Without multiple browsers competing and collaborating, is it possible that innovation will stagnate?

You could argue that we wouldn’t need to upgrade the browsing experience if we were given one really high-quality option to work with. But as we’ve already seen, Google doesn’t always look out for its users. So, who’s to say that it wouldn’t just kick back and wait to make improvements to its browser only when it served its own interests?

That’s not how technology works. As our needs change as consumers and the world around us becomes more complicated, technology always needs to be on the cutting edge. It would be rather reckless to give up on less popular browsers whose mere presence leads to greater innovation in how we move around the web.

As it stands now, we’re better off with multiple browsers. We could definitely stand to trim down the list of browsers that are available — for the sake of development and testing — but it would require the leading browsers to collaborate and work on building a more standardized web.

You can’t design for the majority of your visitors; you have to design for all of them.

As for what you can do with this information, here are my final thoughts:

You can’t design for the majority of your visitors; you have to design for all of them.

So, first things first: familiarize yourself with the differences between the leading web browsers. If you don’t have this set up already, install Chrome, Firefox, and Safari on your desktop and mobile devices. And put them into rotation as you spend time on the web, for work or personal use. You’ll quickly learn where these browsers fall short and where they shine.

Next, take a look at Google Analytics. Which browsers do your visitors use? What about in years past? If you don’t have any data to go on, then you need to assume that visitors could be coming in from any and all browsers.

And, finally, build websites that adhere to basic web standards. You’ll find information on this at the World Wide Web Consortium. Until our web browsers come together to align their rendering engines and browsing experiences, we have to do what we can to bring consistency and stability to the web.