Webmasters and bloggers alike are always trying to improve their blogging.

Each post has to be perfect before they publish it. It has to have the right amount of nice looking images, a certain number of links to back up your sources, and it has to be engaging to your audience. We do this so our blog posts will rank well on Google, and so our readers will enjoy them (nobody likes blocks of text).

What if we could see what the average high ranking blog post was doing to achieve their rankings?

What do you make of the data? Do you think your posting habits will be affected from their discoveries?

Always interested in what goes into the best content we can publish, we recently performed an analysis of 100 top blog posts across a number of popular sites, including Forbes, Mashable, KISSMetrics and SearchEngineWatch. The data speaks for itself, but the conclusions are up to you. What do you see in the data? Here’s what we think.

An average length of a hair over 1,000 words is fairly standard for the industry. The longest we examined, a case study by Moz, packed every paragraph with data and advice. The shortest tended to be quick, short bursts of useful advice. Some were hubs for links to other useful posts, kept up to date with fresh content. 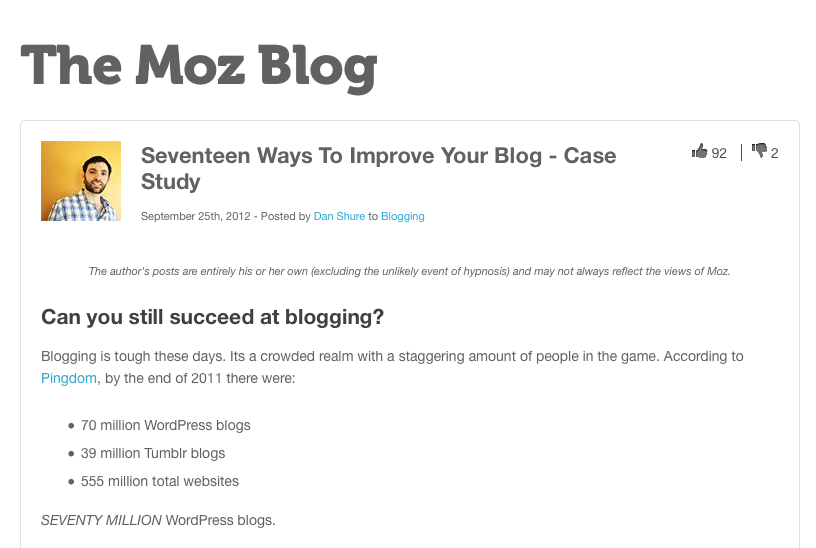 Quotes were present in nearly a quarter of the posts we viewed, though some were as simple as a proverb to set the tone for the post. Social sharing buttons were by far the norm, with only a few barebones site layouts ignoring that blogging convention. Comments are enabled on three quarters of the posts. Those that don’t tended to be more focused on the call to action than the value of the content itself.

Embedding a video was rare throughout these posts. Of the five, four were hosted on YouTube, with the fifth residing on Vimeo. Three were explanations of concepts that went along with the content, while one was an example used to prove a point and the fifth was a tutorial.

Graphics are standard throughout blogging, with only 16 percent of posts containing no images at all. Most of the posts without images came from Forbes or About.com, both of which emphasize an austere look to their sites. Of the rest, often the site layout included plenty of graphics already, so images in the post itself would be cluttered. 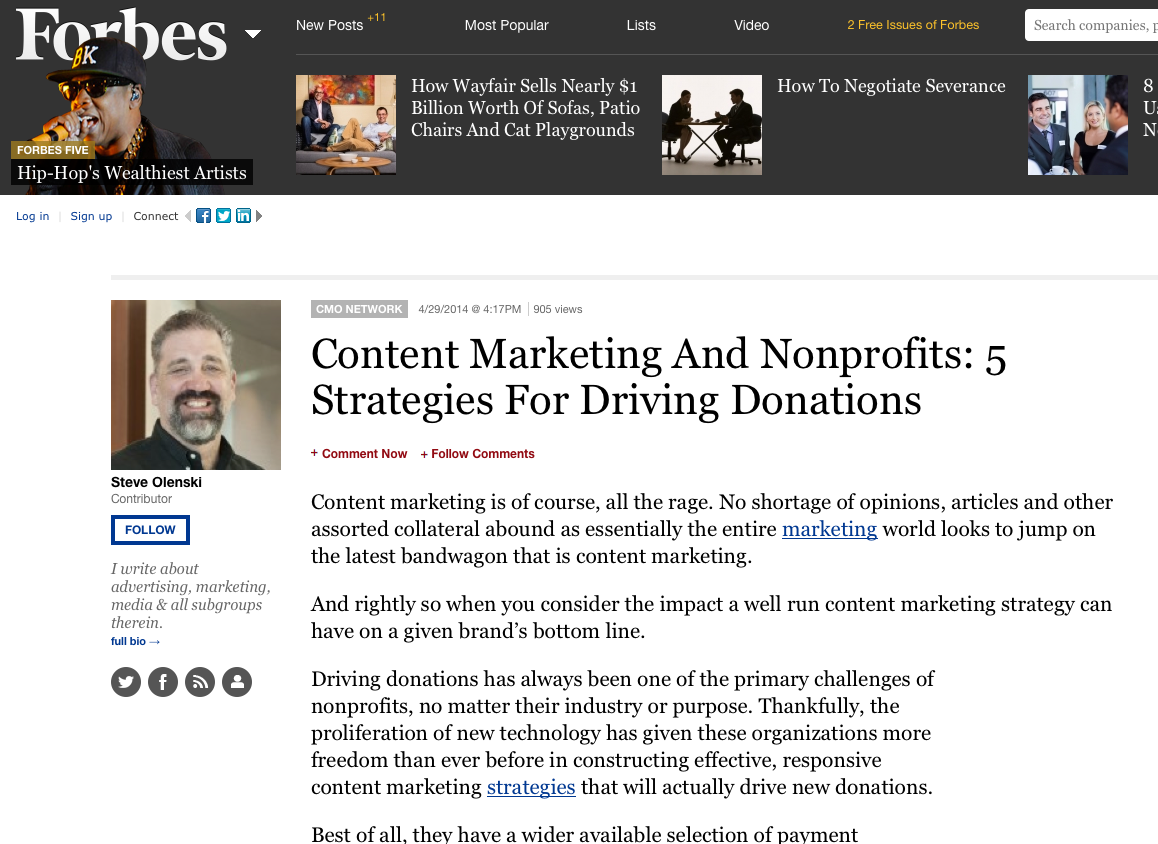 Links are an interestingly skewed statistic. Some of the smaller posts had incredibly high link-per-word ratios, owing to the fact that they were essentially tables of contents for other resources. Eight posts lacked links in the content of the blog, though they often included a final sentence call to action or related content widget.

A length of 50 characters is plenty for most blogs, with none straying over 85. The longest tended to have secondary titles in parentheses, for added emphasis. The shortest? The simple and appropriately titled “Content Marketing.”

Eleven posts answered questions directly posed by the title. 45 posts included numbered lists, which are a popular and powerful way to distribute advice and resources. 35 were guides, none of which overlapped with those eleven answering questions.

Are videos often used as tutorials? In this case, only one out of a hundred posts used a video tutorial, and it was a supplement to the image-heavy text tutorial explaining the same thing. Video seems better utilized as supplementary content or as an example to prove a point. 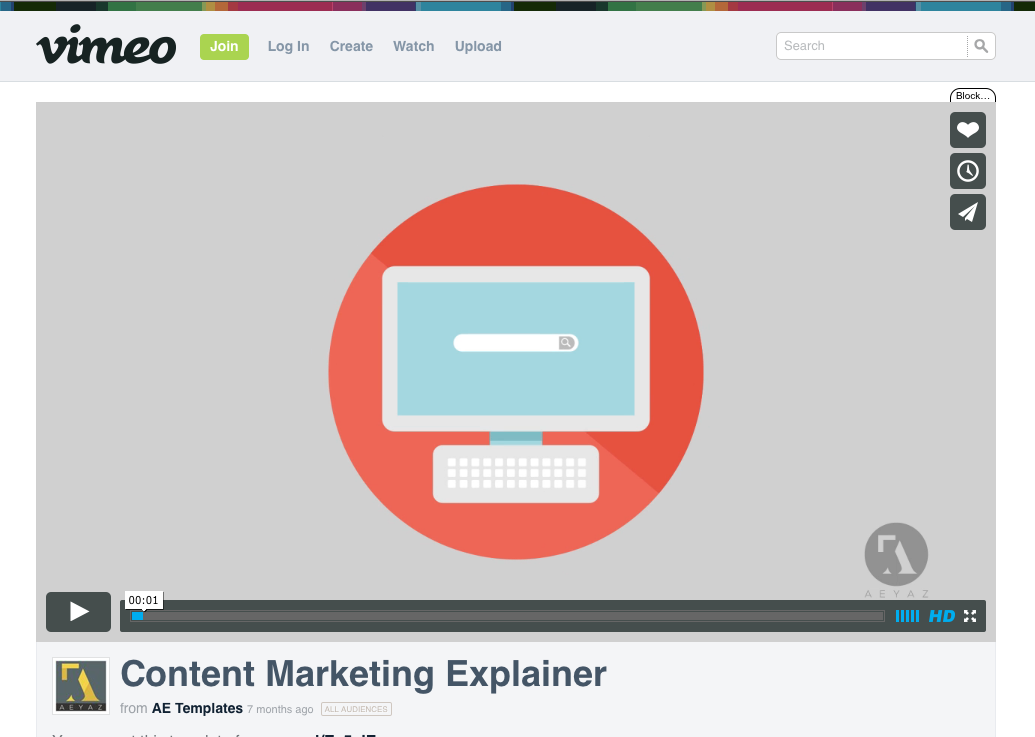 Are images generally used for flavor or for instruction? Numbered lists often used images to illustrate each point, be it a screenshot of an app for each, a graphic that fit the theme or a semi-related image. Posts with few images tended to use one graphic with the title, or an infographic partway through. The most image-heavy posts – the Moz case study, the WikiHow tutorial and a Forbes poll of industry leaders – used images in tight conjunction with the text. The most image-dense posts – that is, those with a high image per word ratio – generally used images to show an example of each point in a list. The most image-dense of all was a numbered list of infographics, letting the graphics speak for themselves.

For the few posts without social sharing buttons, how do they promote sharing their content? Several of the posts relied on site-wide social networking buttons, which linked to the site profiles but didn’t automatically share the individual post.

What about link density? Some popular posts included no links at all, while others were virtually entirely links. Link density – as long as those links provide value, as in the resource posts – seemed not to affect performance of the post at all.

With the raw data in hand, what conclusions can you draw? How do your popular blog posts compare?