CSS works hand in hand with HTML; HTML sorts out the page structure, CSS makes it look pretty and adds subtle levels of interaction. As a web designer you should really get to grips with both these languages. Even if you don’t do the coding yourself, understanding how they work will help you design for the web.

Grasping the Basics: What is CSS?

C.S.S. stands for Cascading Style Sheets; documents which contain styling rules for applying to HTML (or XML, along with a few other structural formats). Multiple style rules can point to one HTML element, in which case there needs to be a way to determine which rule should take effect. The term cascading describes the process of filtering down from general rules, until the most specific rule is encountered. That rule is then chosen to do its work..

Through CSS, presentation can be separated from structure. It solves the need for mashing styling rules in amongst HTML, like this: 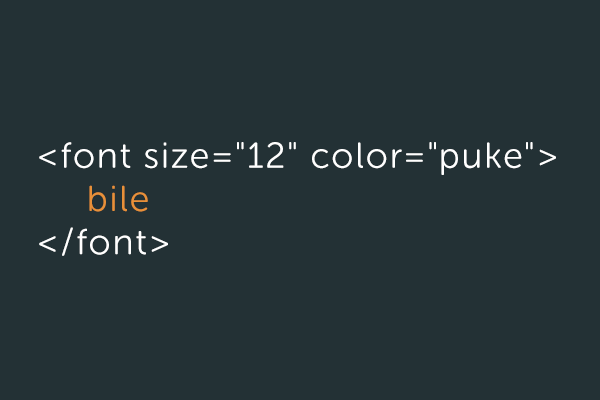 which keeps documents neater and DRYer.

CSS is read by web browsers. They take the markup document, then they apply the styling rules to the elements within that document. 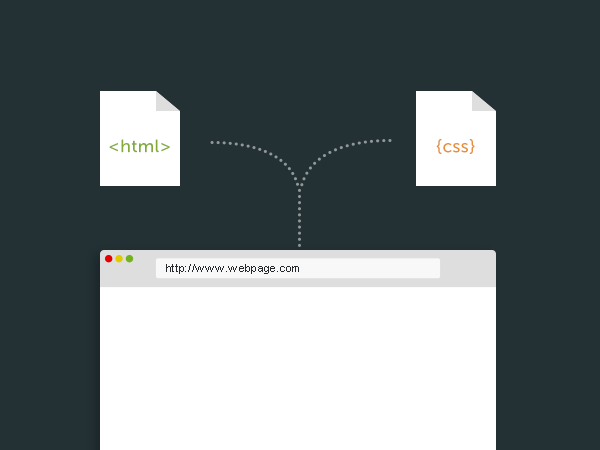 They don’t always interpret style rules the same as each other, and as browsers develop so too does their support of newer styling proposals. It’s often the browser manufacturers themeselves who experiment with CSS properties, in the hope that their suggestions will be adopted by users.

Ultimately, it’s down to the World Wide Web Consortium (W3C) whether CSS properties are standardized or not.

Grasping the Basics: Learn the Syntax 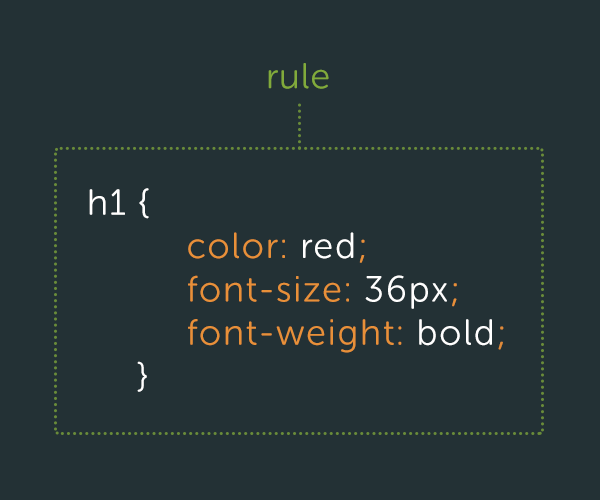 This CSS rule contains all the other bits and bobs we just mentioned. 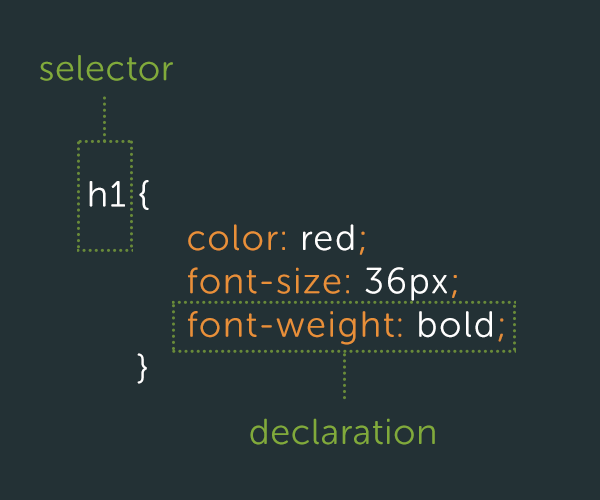 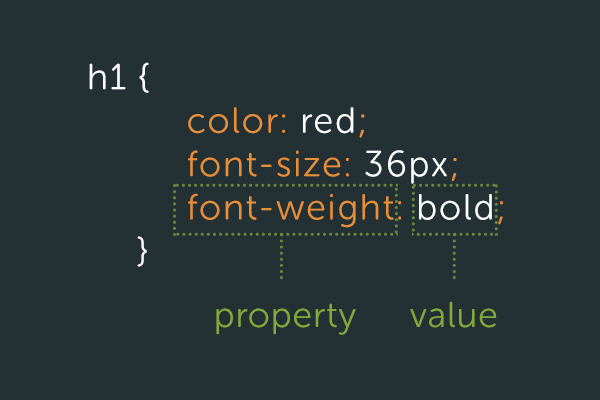 There are many ways you can select HTML elements, from straightforward type selectors: 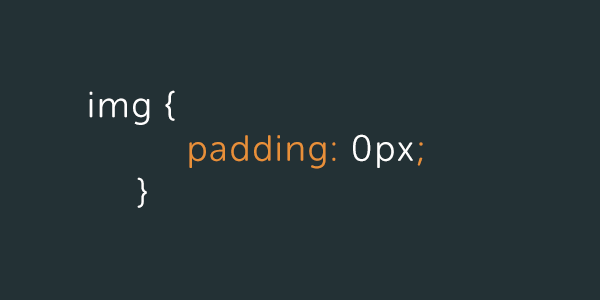 This will select all images and apply zero padding to all of them.

Then we have class selectors, which point to all elements with a specific class applied to them. Take a look at this markup, with its corresponding CSS: 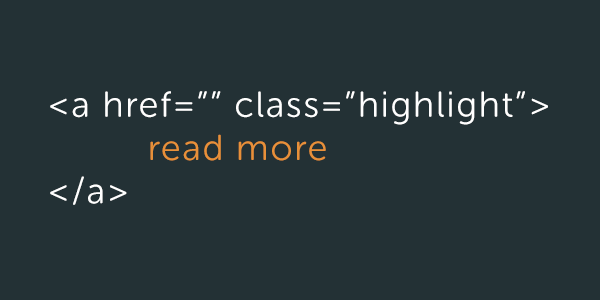 Here’s an anchor, of which there could be many.. 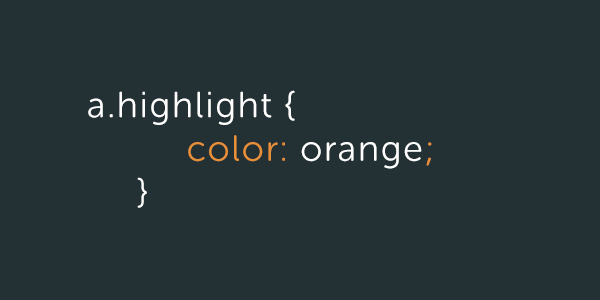 ..then this will select all anchors with a class of “highlight” and make them orange.

Note: contrary to what you might hear, there is no such thing as a CSS class. There are CSS selectors which target HTML classes. You can read more about this on tantek.com and 456 Berea St.

There are a great many possible selectors to learn. There are even more properties to get to grips with (take a look at this list on the W3C site). Later on we’ll look at assignments during which you’ll be asked to learn plenty of each. Having as many as possible at your finger tips will make you a better CSS coder!

Now you have a fundamental understanding of what CSS is, it’s time to dive in properly. There are a number of beginner’s courses online which will help you along; here are just a couple which are definitely worth checking out: 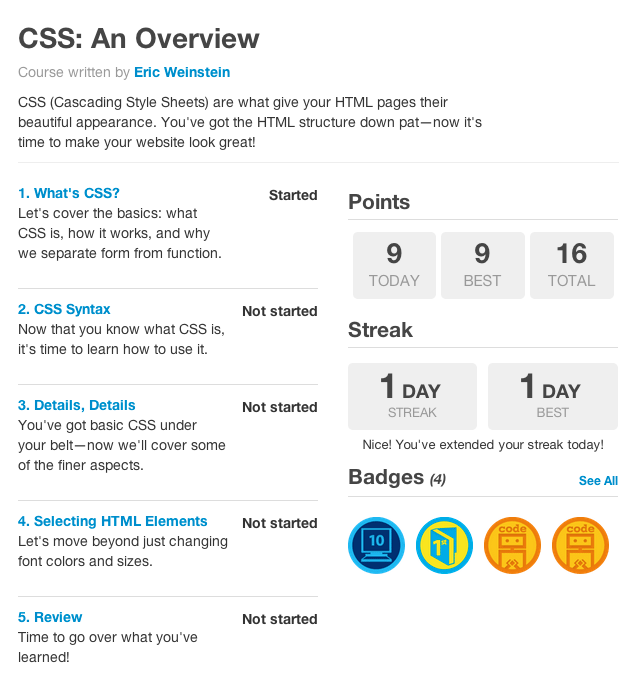 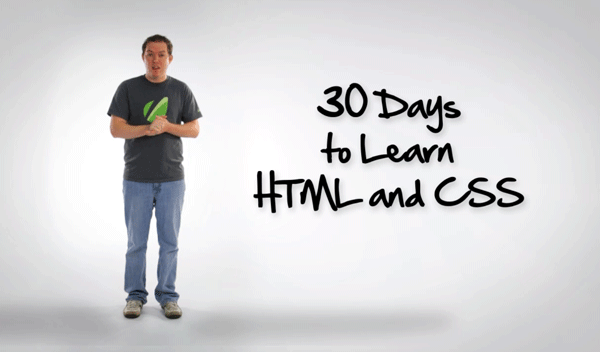 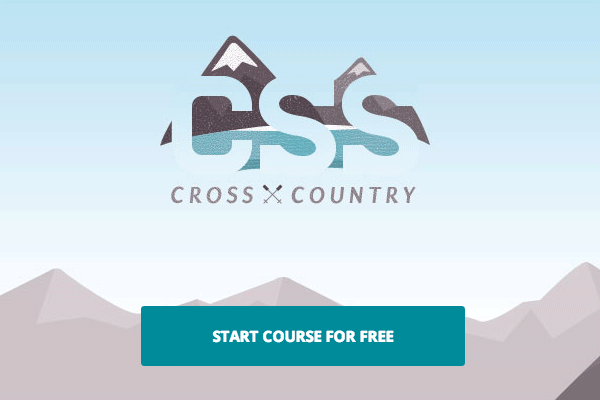 When Dave Shea launched CSS Zen Garden back in May 2003, he aimed to demonstrate that a single HTML document could be styled in infinite ways using different stylesheets. It was a brilliant concept and a real lightbulb moment for designers around the globe. 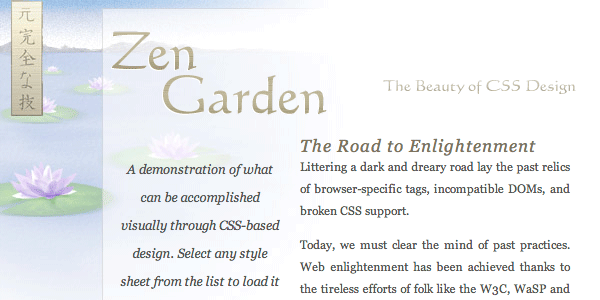 Why not do something similar yourself? Take a simple piece of markup (Chris Coyier’s Unordered List Navigation is the perfect candidate):

See how many different effects you can achieve, just by altering the styles.

Take a look at this Webdesigntuts+ Community Workshop where nearly 100 readers submitted their stylesheets for a simple unordered list. As you’ll see from the results a little imagination can take CSS a long way! 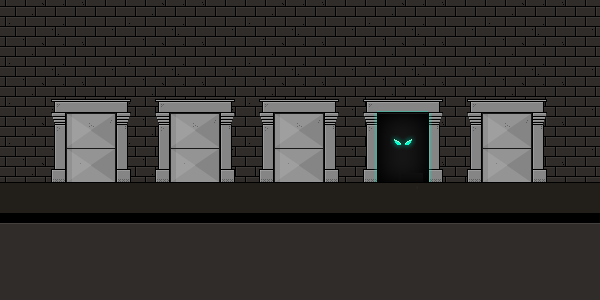 If folks know CSS, they tweet about it – that’s science fact. Pay attention to what CSS celebrities are doing and you will learn plenty. Here are just a couple of twitterers you should be following:

Why not find your own heroes on a social coding site like GitHub or CodePen? The best thing about networks like these is the advice everybody gives each other; if you have a CSS problem, someone will have had it before you and will be willing to lend a hand. 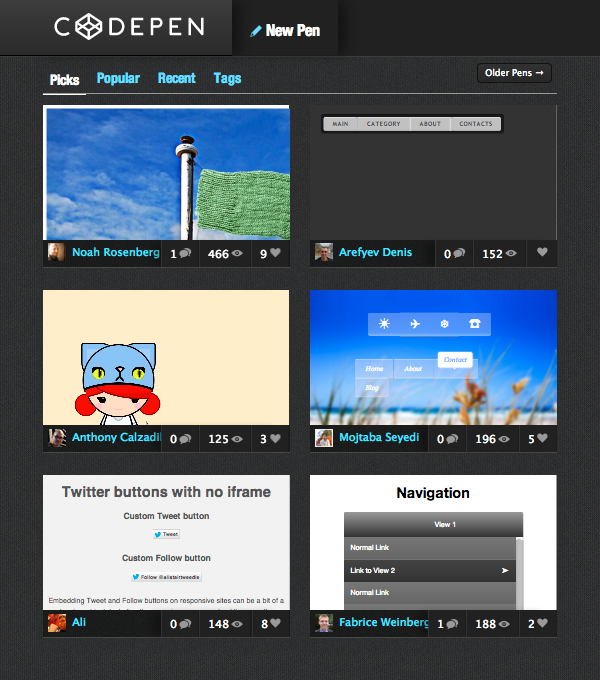 As we mentioned earlier, browsers don’t always interpret your styles equally. This is particularly true if you’re catering for older versions of Internet Explorer, which are way behind the times in terms of CSS adoption. Modern browsers (such as Google Chrome, Mozilla Firefox, Apple Safari and Opera) have more proactive updating management, so it’s less likely that older versions are floating around for long.

Saying that, there are differences between each of these browsers irrespective of how up-to-date they happen to be. Some CSS will be well supported in one browser, differently interpreted in another, so for this reason it’s sound advice to pay attention to browsers.

Here are some useful resources which will help you on your way:

Whether you read them cover to cover, or simply have them to hand if you need quick reference, the best industry books are unparalleled for learning.

CSS has been written about many times, but these publications are my cream of the crop:

Assignment 6: Suss Out Selectors and Specificity

As you gain confidence, your CSS vocabulary will grow. You’ll be committing CSS properties to memory and also the various ways of selecting elements. Now’s the time to really turn it up a notch and seriously learn some CSS selectors.

Learning CSS selectors means also getting to grips with specificity.

Which selectors will override others? What’s the bare minimum syntax I should use in my selectors to be efficient in my coding? The one place I always send people to for learning the rules of specificity is Andy Clarke’s CSS: Specificity Wars. An inspired visualization of how selectors fare when pitted against one another (and the dark forces).

CSS is a very involved discipline. Once you have the basics under your belt, there are many avenues for further investigation. For example:

CSS3 is constantly on the move. New properties are adopted, others are dropped altogether by browsers, sometimes the syntax even changes. Getting to grips with CSS Gradients, will be another nail in the coffin of your Photoshop use; why use snipped images when you can CSS it?!

Refer to CSS3 Please to see all correct CSS3 implementation, with recommended fallbacks for non-supporting browsers. Also, take a look at CSS3 Essentials on Tuts+ Premium to give your knowledge a boost.

It turns out CSS could be better. Once you’ve started using CSS for real world projects, you’ll probably draw the same conclusion. Maintaining large CSS files is difficult, repetition is common – and why can’t you use a variable to store the value of a HEX color instead of typing it over and over?! CSS Preprocessors such as Sass and LESS solve all these issues and more. Without even having to ‘re-learn’ a similar language (just stick to vanilla CSS if you want) you can harness the power of preprocessors.

Check out Get Into LESS and Mastering SASS if you’re interested in learning more.

SMACSS (or Scalable and Modular Architecture for CSS) is a concept developed by Jonathan Snook, which aims to combat the awkward maintainability of CSS files. It doesn’t teach a new language, rather suggests ways in which you can make your current CSS more organized.

Writing modular CSS enables you to take chunks of styling code and slot it into other projects, without ruining the rest of your styles. Specificity management at its best.

There’s no question that with skills like HTML and CSS under your belt, you’ll be a much better web designer. Follow the two learning processes we’ve outlined and you’ll be well on your way.

If you have any CSS learning recommendations, shout them out in the comments!