For those looking to build hybrid mobile apps, Ionic is one of the first frameworks that you’ll run into. There’s good reason that it has gained significant usage among developers looking to create apps for several mobile devices from a single code base.

Ionic has a number of features that go beyond other offerings though, with something for everyone from beginning developers to veterans.

Read on to find out more about Ionic, and find tutorials to help you advance your skills no matter your current level.

Ionic aims to solve a huge problem that came along with the explosion of smart devices. If there are a dozen different mobile operating systems out there, how do you build an app using the least amount of resources?

More recently, the market has become dominated by two mobile operating systems, iOS and Android. Each still required a separate app to be created though, using its own set of languages and libraries. However, with frameworks like Ionic, it has become possible to create your mobile app with a single code base, and deploy it to multiple types of devices.

What does Ionic do though exactly?

It allows developers to create a mobile app using familiar web technologies: HTML, CSS and  JavaScript. It also has a set of libraries that help to create abstractions for system features on each type of mobile device. This means that the command to grab a picture from an Android camera and an Apple camera look largely the same in the JavaScript code, despite big differences under the hood.

Before getting started with Ionic though, you’ll want to have a solid grasp on JavaScript.

Ionic is a framework built on what is arguably the most loved and simultaneously most hated programming language of all time, JavaScript. Having been around for more than two decades, JavaScript’s proliferation on the web makes it one of the most used languages out there.

To get started with Ionic then, you’ll first need to know JavaScript.

There’s a number of ways to get up to speed on JavaScript, with one of the available courses being “Modern JavaScript Fundamentals” by Dan Wellman. This 6 hour course takes you through all of the basics of JavaScript, and prepares your for working with it, and lays the groundwork used in many of its frameworks.

Once you’re up to speed on JavaScript, you’ll want to look at some tutorials or courses on Angular. Ionic is built on top of the Angular framework (similar to how React Native is built on React), so having the basics of the framework down as well will go a long way to making your learning path go smoothly. The Angular Fundamentals course will help you to flex your skills within the framework.

Once you’ve brushed up on your JavaScript, it’s finally time to start digging into Ionic.

Basics of the Ionic Framework

Before getting into making fully-fledged apps, let’s start by dabbling in the basics first. While we talked about the Ionic Framework a bit, it’s important to know that Ionic is actually a series of related services.

We’ll be focusing on the open source framework, but there are also expanded tools such as a drag and drop editor, enterprise versions of the framework, and a continuous deployment aspect. The drag and drop editor is especially interesting, and if you want to get started with it, check out the course “Easy Mobile Apps with Ionic Creator” by Reginald Dawson.

To start to get oriented with the code and concepts behind Ionic, take a look at “Ionic from Scratch: Getting Started with Ionic”. Once you have your environment set up, “Ionic from Scratch: Working with Ionic Components” will help you to become comfortable with the framework’s components and screens. After that, take some time to look around the Ionic developer documentation. The introduction, components, and theming areas are must-reads for anyone hoping to make a full mobile app using the framework.

Once you’ve worked your way through all of that information, you’re now at the fun step, making apps! Next, we’ll look at resources that can help you bring it all together.

Once you’ve got the basics of the framework down, it’s time to start making apps. The goal at this point is going to be to learn more about advanced components, as well as looking at how to structure and create simple apps.

The next step will be looking at the developer docs in more detail, really delving into the areas for specific components, architecture, and each of Ionic’s core concepts. Then it might make sense to get your hands on some complete code examples to break down for understanding.

To explore advanced components, check out the article “Ionic Components for Quickly Building Your MVP”. It includes links to complex components for UI, social authentication, restaurant booking, and a number of other pieces that can help to expand your understanding of components.

Once you feel comfortable with that, take a look at some existing templates for Ionic. These fully-fledged apps can help you to get a feel for how the architecture for apps can look, as well as how all of the components fit together. The article “15 Ready-Made Ionic 3 App Templates” links out to a number of useful app templates in many niches, each giving you direct access to their source code.

What Is an Ionic App Template?

Ionic templates work similar to front-end development themes and templates that you might have run into using other platforms, such as WordPress themes. They consist of a series of files and assets that help to bridge the gap between the framework itself and the finished product that you are seeking.

There are a ton of benefits to using an Ionic app template, namely:

Pairing these benefits with the already powerful framework provided by Ionic gives developers a huge leg up when it comes to app development. Small development teams and those with limited resources will find them especially helpful. Here are a couple of the best: 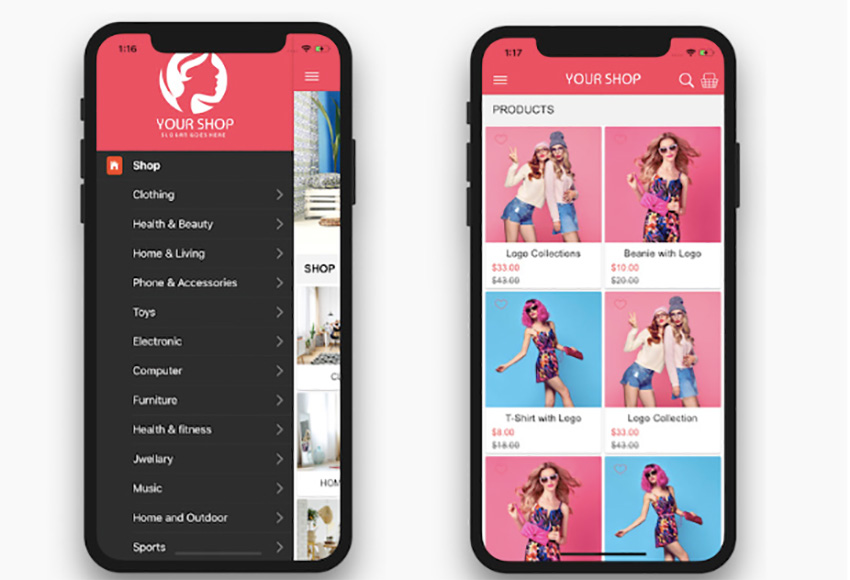 Ionic 3 App for WooCommerce, developed by hakeemnala, is a template you should definitely consider using if you are creating an e-commerce app. It allows you to quickly create a beautiful app that can connect to your WooCommerce website. 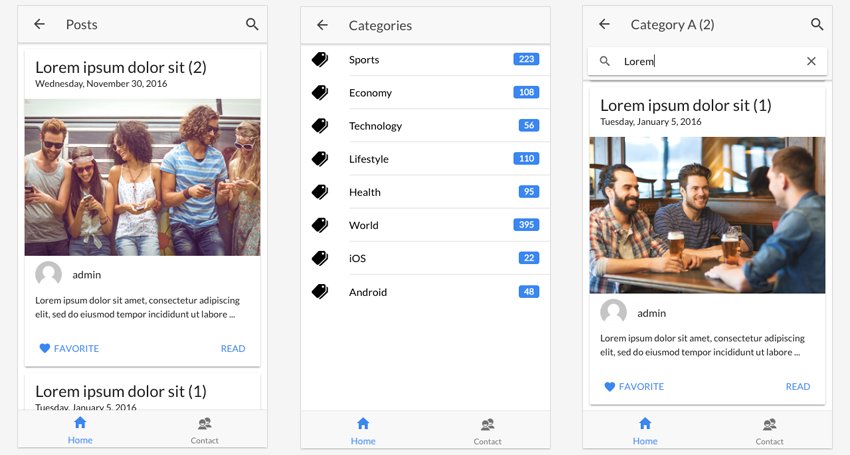 If you are looking for a modern template with dozens of beautiful pages and a wide variety of useful features, this template is for you. Built with Ionic 3, it is very modular and extremely easy to extend. In fact, it has over 20 modules and over 35 components!

The developers of Ionic 3 UI Theme promise that you can make just about any app with their UI app template. With over 100 layouts and hundreds of HTML5 UI components, they might just be right. Apart from offering maximum flexibility and easy customization, the app offers Google Analytics so you can track your user’s behavior, MailChimp integration, Google Maps integration, and so much more.

OIten the focus with Ionic is on how easy it is to create very simple apps, especially with its drag and drop editor. Beyond that though, it presents a set of complex features and a robust framework. It’s even become the framework of choice for a number of popular apps, including Untappd, MarketWatch, Nationwide, and Joule.

One of the most interesting aspects of Ionic is its theme system, which allows for easy swapping of styling with CSS and CSS-live variables. Ionic has thorough documentation on its theme system, along with several advanced features here.

If you’re looking to follow along with creation of a more complex app, check out the series “Creating a Task Manager App with Ionic”. After that, take a look at some of the other Ionic services that can be integrated, including push notifications (“Get Started with Ionic Services: Push”). If you’re looking to work on a large-scale or enterprise level, learning about Ionic’s deploy service is also important (“Get Started with Ionic Services: Deploy”).

How Did You Learn Ionic Framework?

There are many paths to learning Ionic, but hopefully this gives you some starting points no matter what point of your journey you’re at. How did you learn Ionic? What resources did you find the most useful? Let us know in the comments below!