When you see the Coca-cola on television what do you think? Surely you are used to seeing Coca-cola? How the Coca-cola in social media? Coca-cola is doing branding anywhere done in totality, it is evident from the web bussiness insider which puts Coca-Cola in ranks 13th on Twitter brand pages and fan web page featuring the Coca-Cola is ranks 10th in top Facebook brand pages.

Predicate 20 in the two most popular social media today is not an easy thing to achieve by Coca-cola, here I want to talk about the Coca-cola secret – how they can to occupy the top 20 brand in the big social media:

I think this is the key to win the hearts of Coca-cola consumers, as we have discussed in my previous article with the title Make your brand more social on Facebook – learn from 8 top brand, and Coca-cola is one of the 8 top brand inside that post. 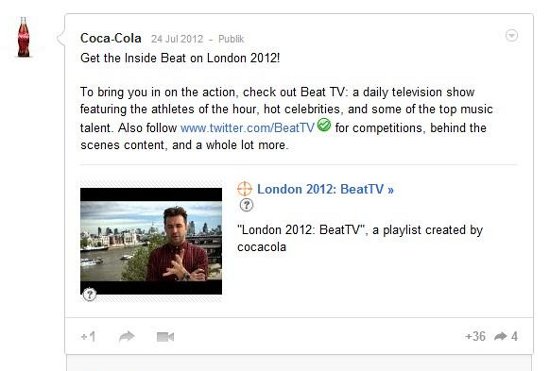 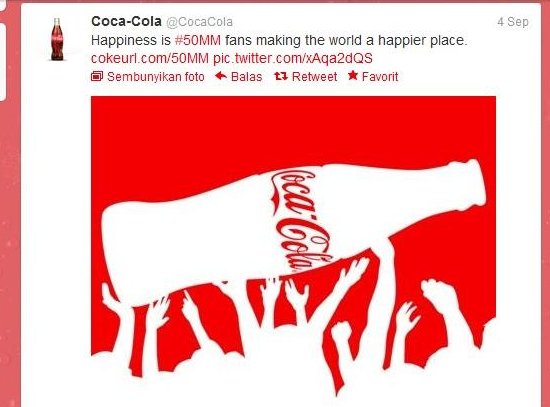 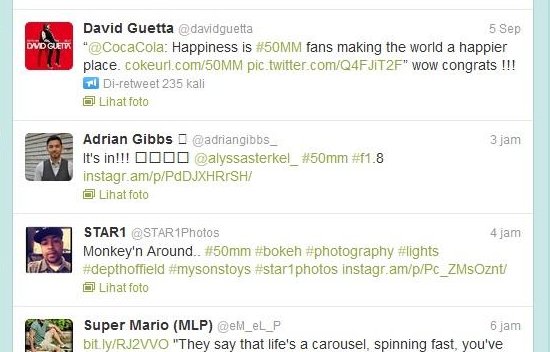 The account page belongs to Coca-cola in each social media always attracted the attention of consumers. Unlike other the brands that only emphasizes the promotion of any product or service, Coca-cola pages are attract more fans than that.

As we can see in the example below, Coca-cola was presenting the photo uploaded by their Facebook fan. How do you think? It’s very interesting . Then on their Google Plus account, Coca-cola invite their follower to share their photos through Flickr with the theme of what your big leap today? 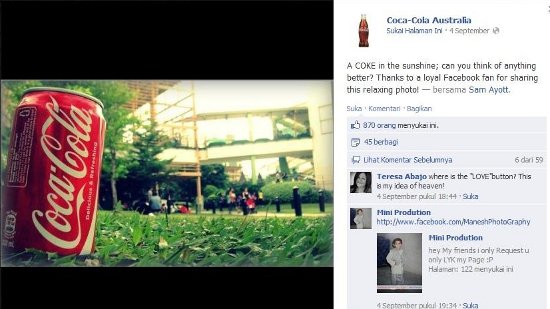 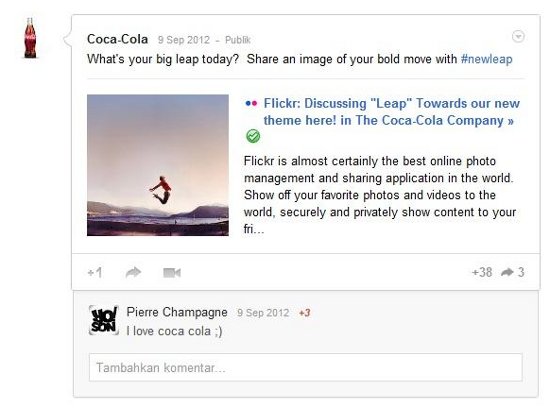 Selling goods or services without communicating with your customers certainly like food without spices. Coca-Cola sees this as a need to promote their products in social media. Almost in Coca-cola social media accounts, when Coca-cola reply comment status or tweet, their invites the customers to express their opinions.

As shown below, Coca-cola tried to ask what is the meaning of happiness in their Google Plus account. And in their Facebook account, Coca-cola express opinions about enjoys Coca-cola in the snow and invites their fans to give their like. This strategy is always getting a positive response from the customers. 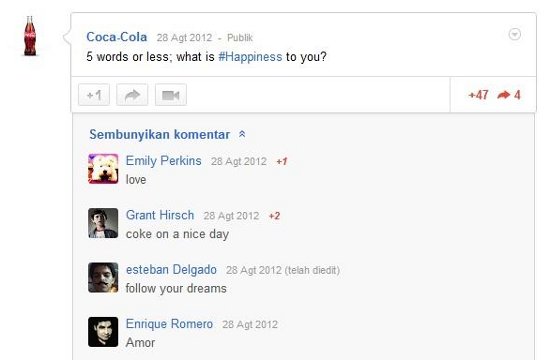 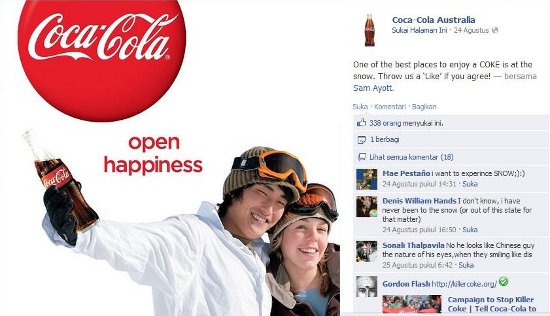 Beside to attract fans a much as possible, social media is also can to share your offline events. This strategy is like the second point which states that Coca-cola is always interesting to their fans.

Let’s look the example below. Coca-cola share the joy by uploading photos of their various offline events. This strategy will add the positive image in the eyes of their fans. 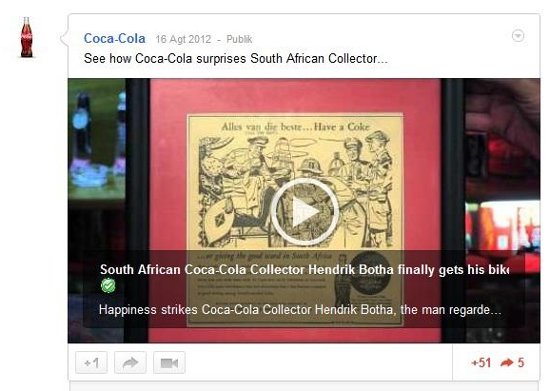 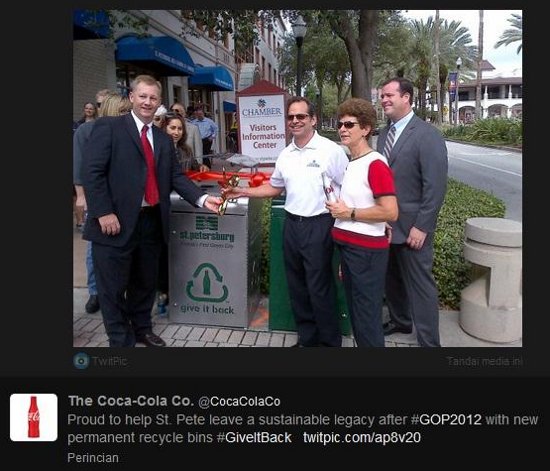 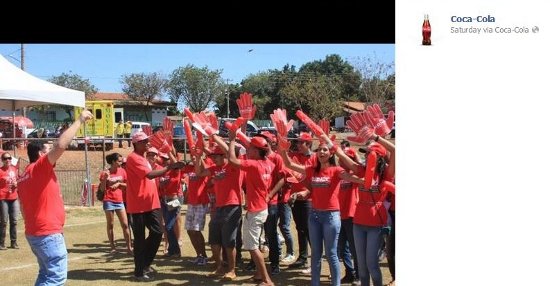 Do you ever avoid sales promotion? I bet you never did.
Why you should avoid when approached by a sales promotion girl or boy? Course you feel any discomfort when you made an object to promote, sometimes you also like being forced to buy what they have to offer.

A professional branding actors certainly would not do this to customers, such as those made by Coca-cola in doing branding in social media. Well, let’s look what they have done. Coca-cola say happy birthday to Mandela, indirectly inside the birthday greetings contains a promotion, Coca-cola put names and pictures Coca-cola bottles. Clever right?

Then in their Facebook account, Coca-cola in collaboration with McDonalds to give 6 free Coca Cola glass to collect in order to welcome the Olympics. With limited time. 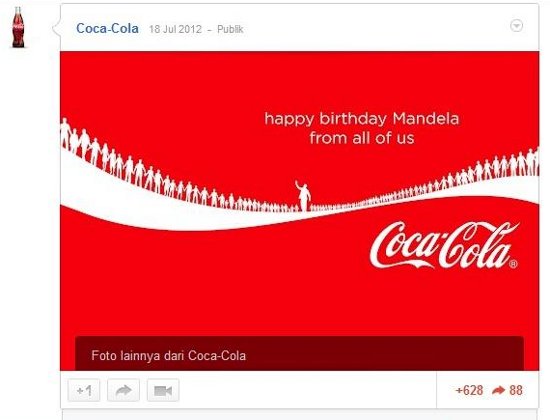 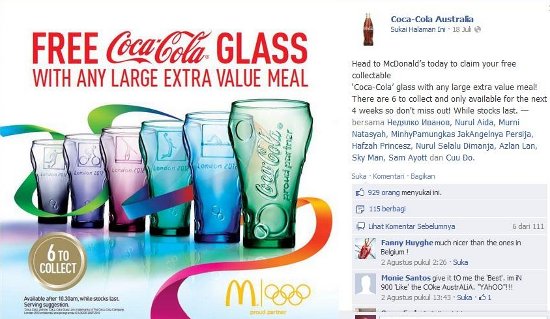 In doing branding, any company doing market strategy. And social media strategy is one of their strategy beside the other strategies in off-line market. In this article, we have learn that to become the top brand in each social media, Coca-Cola don’t underestimate branding promotion to their fans and follower.