Starting a new project is in a lot of ways the hardest part. It’s the only stage of development that you’re turning nothing into something.

Luckily, there are proven methods to reduce the “empty canvas” syndrome. We’ll talk about the best ways to handle the early stages of brainstorming and concepting and how it translates into wireframing to prototyping.

As described in the Guide to Wireframing, brainstorming for design ideas can feel like you’re trying to grab something out of thin air, especially if you don’t have a fixed method. In these cases, its best to have organized methods to lend structure to an otherwise disorderly process.

Our favorite at UXPin is the design studio exercise, which is widely advocated by designers like Will Evans and Todd Zaki Warfel. This activity satisfies multiple functions at once: creating inspiration for ideas, building unity as a team, and unearthing possible UI design issues. More importantly, by actually involving stakeholders (instead of just asking for opinions), there’s less a risk of design by committee. 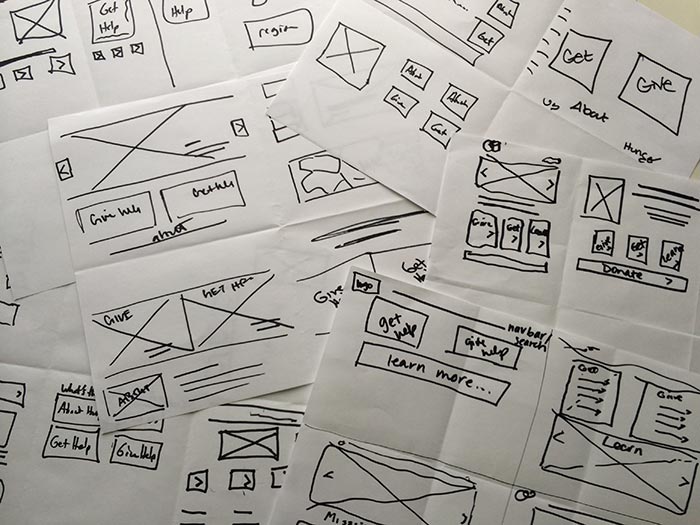 This is a process we follow that takes a little over an hour, but helps us turn 10-15 rough ideas into 3-4 solid ones worthy of wireframing.

Designer Brad Frost wrote an excellent piece about how this exercise helped him. Since everyone can present ideas (even non-design folks), you may find the seed of an idea in the least likely of places. Just make sure there’s a strong leader — ideally the designer will have the final say.

The design studio exercise is not the only brainstorming activity available to you. Stanford compiled a small list of equally beneficial design brainstorming activities, which you can see on their Use Our Methods page. We list other strategies for idea generation in the free Guide to UX Design Process & Documentation.

Wireframing — From Ideas to Outlines

After you’ve generated enough ideas, the design team will split off and start iterating, but this doesn’t mean you can let the team drift apart.

The typical process flow after brainstorming follows the order of sketching, low fidelity wireframing, mid to hi fidelity mockups, and finally prototyping. In some cases, designers may even skip mockups entirely and dive into rapid prototyping, but we recommend giving each their due time. 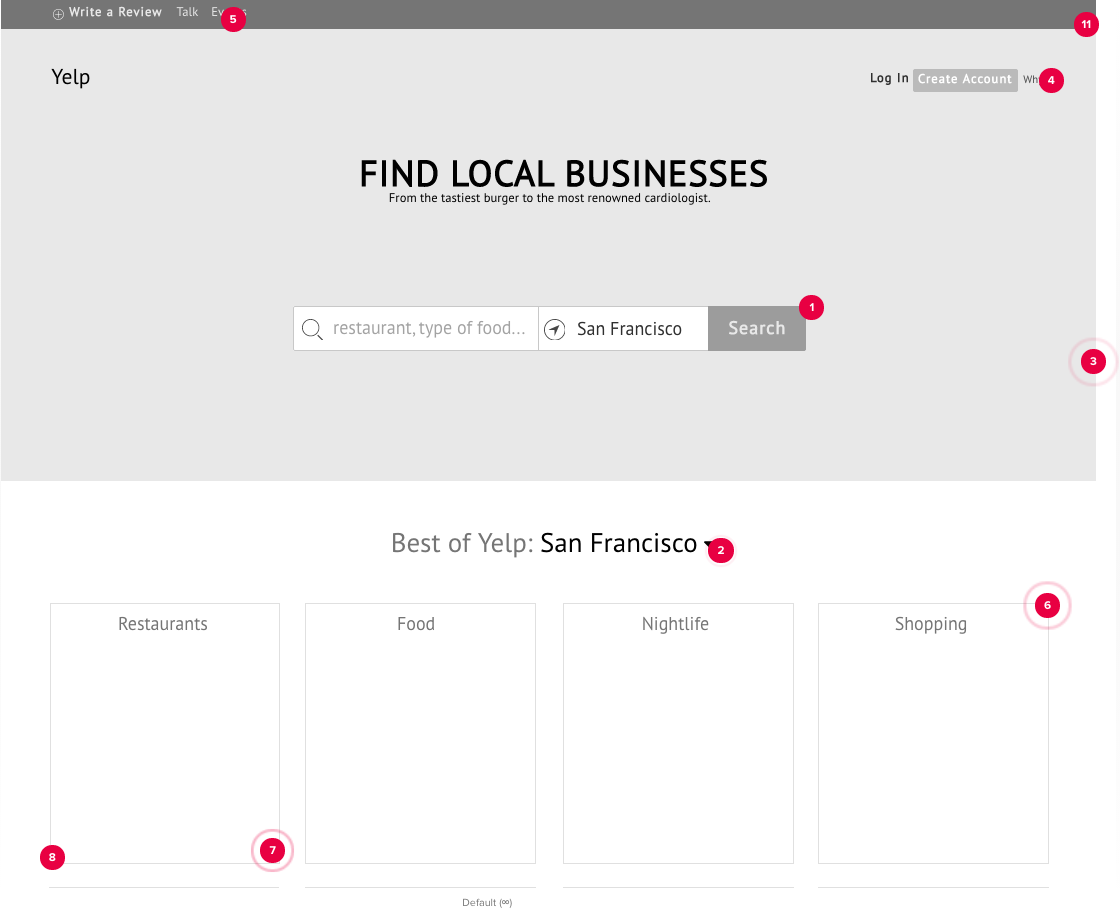 Your most basic outline — outside of rough sketches — will be your wireframe. To follow along, you can check out our low-fidelity wireframe that we created for a redesign of Yelp. This is where your ideas are laid out tangibly, so as to avoid misinterpretation across the team. The typical wireframe includes three layers of information:

While it’s tempting to “skimp” during the wireframing phase, it pays off in the long run to make them as useful as possible. Low fidelity wireframes help save time and money by giving you a quick medium for feedback on visual hierarchy. High fidelity wireframes (which are known as mockups) are better for reflecting form and function when persuading stakeholders. Whichever path you choose, the seven steps we list below will help you maximize the benefits of wireframing:

Wireframes are the bridge between idea and prototypes. If you’d like to see some great wireframe examples, check out this gallery of 18 real company wireframes to see how some big name companies like Apple and Twitter started with simple low-fidelity wireframes.

For a more comprehensive explanation of the wireframing process including helpful exercises and template libraries, check out the Guide to Wireframing.

If wireframes test the structure of your site, then prototypes test the experience. CEO of UXPin, Marcin Treder, explains in an article that the goal of a prototype is to simulate the interaction between a user and the interface. What separates prototypes from other early stage phases is the UI elements, things like clickable buttons, user flow, and functionality. As with the other stages, catching and fixing problems in the design stage is much easier than when you’re stuck in code. 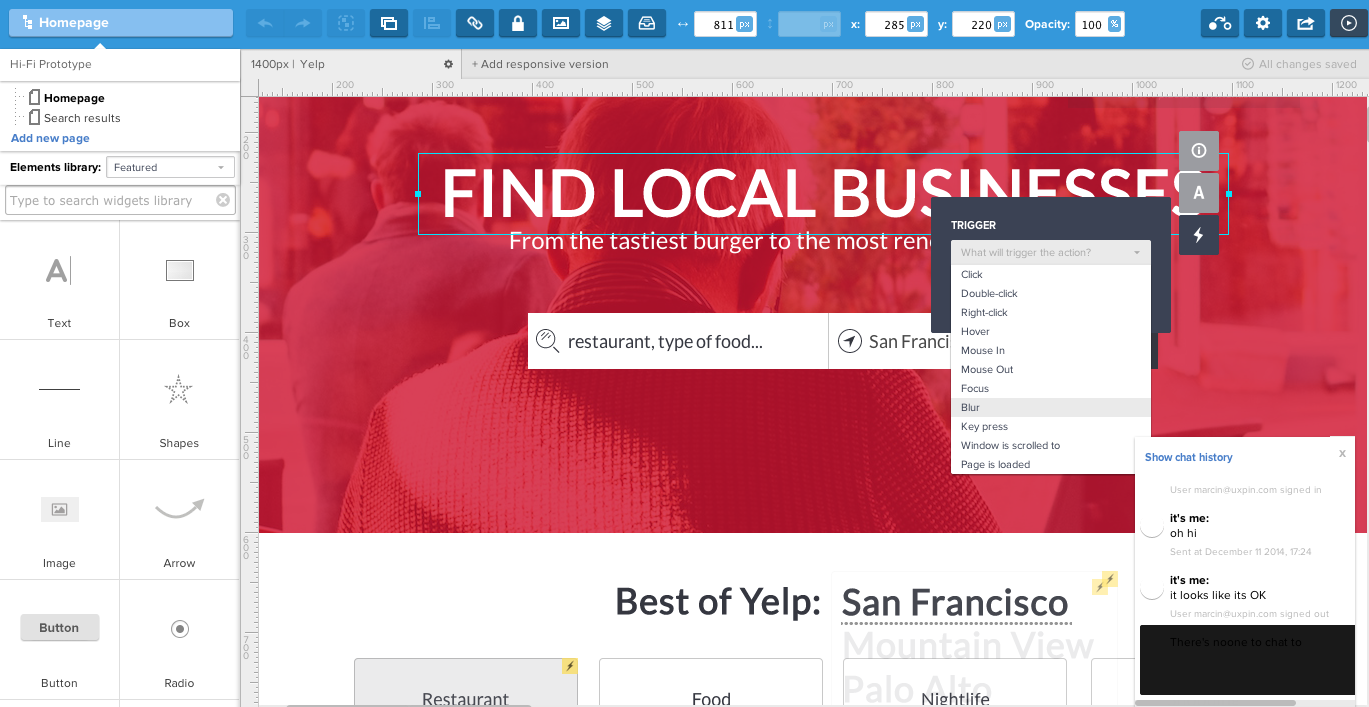 Click to see larger image and play with a few interactions

Some of the most helpful advice on prototyping comes from the UI Designer at Basecamp Jonas Downey, who tested their new app Know Your Company with a prototype. They had many ideas, but needed a quick way to test if it could all be molded into a cohesive product. Here’s 7 tips that we’ve found helpful in the hundreds of prototypes we’ve created (like the one above):

The above tips are what have worked best for our own design process. In addition to digital prototyping, you can also try paper prototyping as an early process. When you’re ready to get started, you can check out an all-fidelity wireframing and prototyping like our own UXPin and other tools like Invision, Balsamiq, and Moqups.

To Reality and Beyond

This piece should help you understand the process of turning design ideas into workable prototypes, but that’s just the beginning. While it may be difficult to create something from nothing, turning something into something better and workable is no easy feat either.

“You can use an eraser on the drafting table or a sledge hammer on the construction site.” – Frank Lloyd Wright

On the bright side, if you follow these recommendations for the brainstorming, wireframing, and prototyping phases, you will have a solid foundation that will support the rest of your development. A good start leads to a good end.

For more practical advice on building web interfaces based on examples from 33 top companies like AirBnB, Wufoo, and Linkedin, check out the free 109-page e-book Web UI Best Practices.