With the release of Android 5.0 Lollipop, one of the most radical design overhauls of the Google’s mobile operating system, the new era of the Android is being rolled out. The latest OS is set to bring a raft of new changes, updates, and features that are sure to change the way you have ever used your Android Smartphone.

The ‘Material’ UI design is what has created all the buzzwords about this newly launch. Although, Material design is something which has already made its way in small Kitkat updates, but in Android 5.0 the experience is entirely different. There is a range of Google’s stalwart icons and applications which have been redesigned and there is also some amazing range of features which are set to boggle your mind. And the best part is, it extends Android even further from phones to tablets and wearables.

While, Android Lollipop has been enjoying a darling status in the mobile world, thanks to awesome updates and significant improvements, Android developers are expected to change their way of developing Android apps due to the extensive set of new developer tools and APIs which clearly signaling about the Google intention of re-building the Android ecosystem seriously than ever before.

So, here are five critical changes that Android developers are expected to adapt while developing for Lollipop. 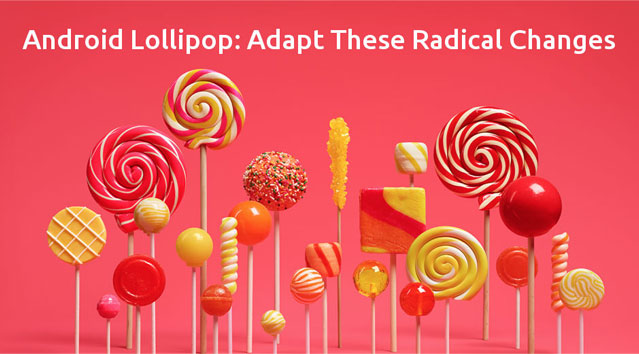 Google is very clear about the difference it has created from iOS by adopting the material design. Apple did a hard work of creating flat design last year in iOS7. The design was clean, modern, and depicted the Apple’s new design concept. iOS 8 also built using the same design with the addition of more consistency and refined iconography.

On the contrary, Google’s Android Lollipop represents the biggest turn in terms of UI design in the Android history. As the name suggests, Material design represents the physicality aspect of a design rather than superficiality. The overall design is made using rules on how a specific function would react to another when activated. Also, how multiple UI layers should react and how animations, ripples, and shadows look real.

What Android Developers Should Learn

To provide a successful user experience, developers need to understand what is happening inside the design. As compared to iOS, Android Lollipop is a surprise because it’s the first time Google is actually playing around the design. It’s a design which is not only about visuals, but it’s also about instructions and an altogether learning.

Parts of the designing anticipations are followed by the principle of renewable proactively followed by Google. Android Lollipop seems like an amusing turn. All the familiar elements are there, with a bit difference in the starting point. News rules and guidelines come into effect, giving developers new opportunity to explore something new. Old elements are incorporated but with a fresh appeal. Plus, new tools and APIs will add to the developer efficiency, while making their experience in building apps more standardized.

What Developers Should Do?

Android is also making changes in its ART, so developers need to ensure their apps work properly with the ART. Also, since they need to adapt to these changes, their app projects would look different from what they have made earlier. Plus, cross platform tools would be under pressure in the process of making them compatible with different platforms.

Notifications have always been a plus point of Google since day one, and with Lollipop the company strides ahead of the pack one again. The operating system provides a much smooth flow for the notifications. They not only provide a way to perform fast actions but also an easier access to the settings. Users can either extend or contract them to see the information as per their choice. The versatility of these notifications is also extending to the lockscreen- a feature which has been already tried by Apple and Google is just trying to catch up in the Lollipop.

But the thing developers need to understand here that the notifications could also be blocked with the new “interruptions” screen. And once your app is blocked, chances are bigger that your app might die in the wine.

What Developers Should Do?

If you haven’t planned any strategy with regards to notification, it’s time to do that. The competition is fierce and there are only few apps which actually top the game. Amazon and Ebay are already leveraging the benefits of notifications to their full potential. Developers need to formulate a strong plan to make their apps visible as much as possible without disturbing the user.

Android Lollipop is not only a huge step for Google but an opportunity as well as a challenge for the developers. It’s a visual representation blended with a methodology which will influence the future of app development and the design in regards of the OS.