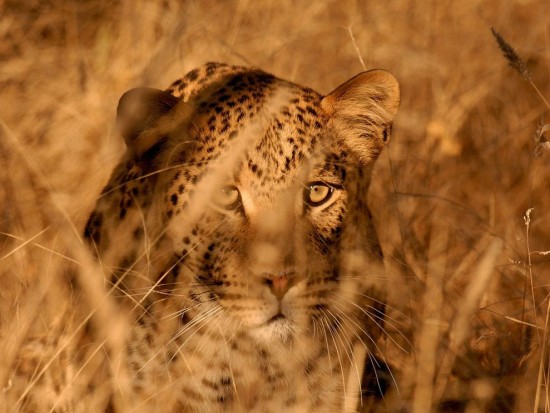 Today for you daily inspiration dose of Photography, we have showcased some of the best and truly amazing photo from National Geographic Society. The National Geographic Society‘s historical mission is “to increase and diffuse geographic knowledge while promoting the conservation of the world’s cultural, historical, and natural resources. Hope you will like these stunning photos and choose them to decor your desktops, please follow the link to download high resolution images.

I left the highway to make a photo of the sunset that day. I then encountered this curious flock of sheep with the single black example taking its position prominently mid-front and staring at me. A few moments later they all lost interest and went on their way. 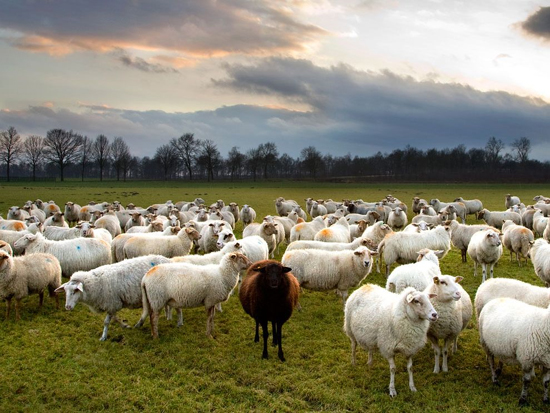 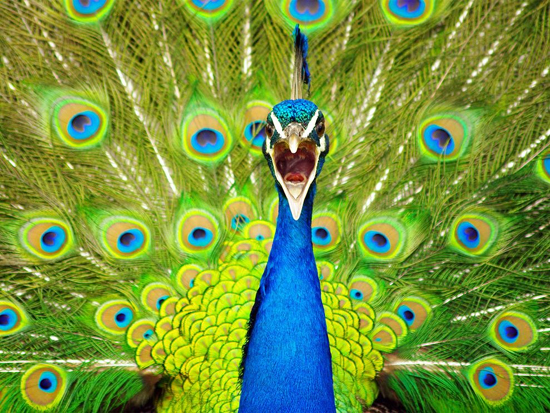 Staying in Asia for many years has given me the opportunity to get close to wildlife on many occasions. This female Smith’s green-eyed gecko chose to live on one of the chalets next to my home, taking advantage of the insects attracted by the lights at night. 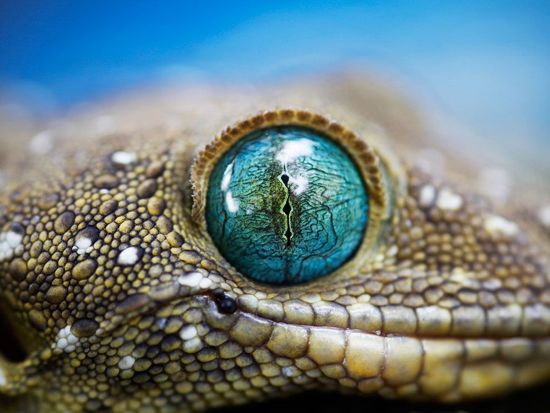 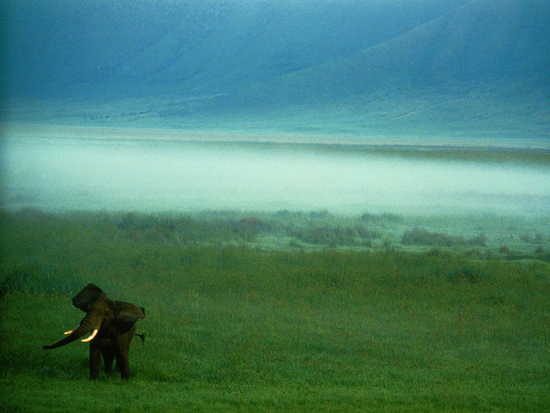 A tagged northern spotted owl swoops toward a researcher’s lure in a young redwood forest. 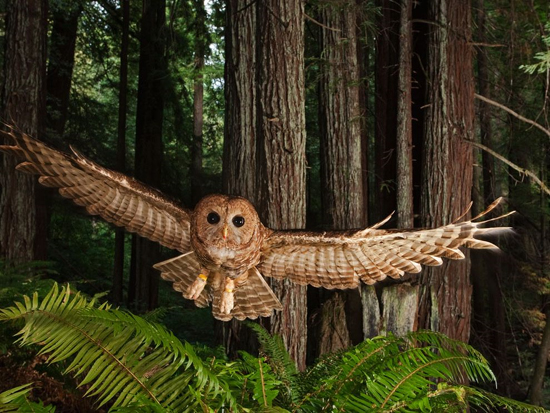 Penguins surface near an air hole in Antarctica, captured with a remote underwater camera. 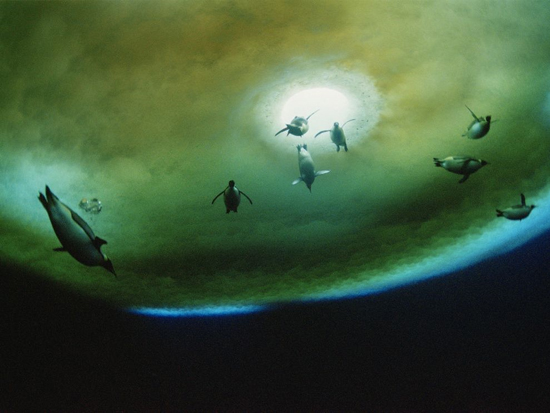 A brilliant blur as it plucks a butterfly from the air, the European bee-eater leads a colorful life on three continents. 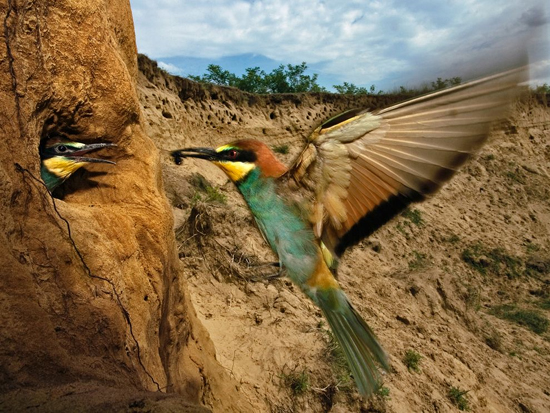 This is Keeco the Husky pup with his beautiful bright blue eyes. This shot was taken in Northern Alberta. 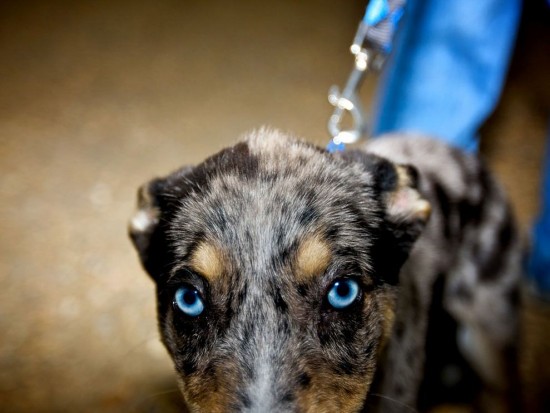 Out on our early morning drive in the Ongrava Reserve near Etosha National Park, Namibia, we spotted a shape by the side of the road under a tree. Our guide thought it was a lion but as we approached, the cat lifted its head and it was clearly a leopard! It crossed the road and disappeared into the tall grasses but as we drove by, we spotted it staring at us for a few seconds before turning on its heels and disappearing. I only had time to get two shots!

Watching a mahout lovingly bathe his elephant, I tried capturing the moment from the riverside but wasn’t satisfied with what I saw through the viewfinder. There was something lacking that made the image not do justice to the scene. I then climbed a tree with a branch extending out over the water and got my shot, which may have been my last as I almost fell off after taking it. I’m sure the beautiful elephant would not have been very happy about me falling out of a tree straight onto her stomach! 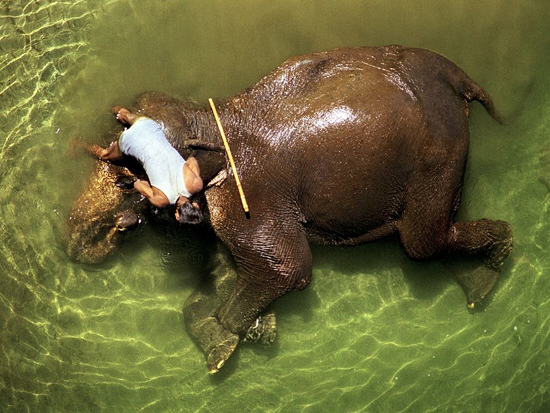 Relief is a rolling back scratch in the brush for a hobbled horse freed of its saddle. Several outfitters guide clients into the Muska-Kechika Management Area in the Canadian Rockies, and some take hunters, who pay thousands of dollars for a shot at big game. 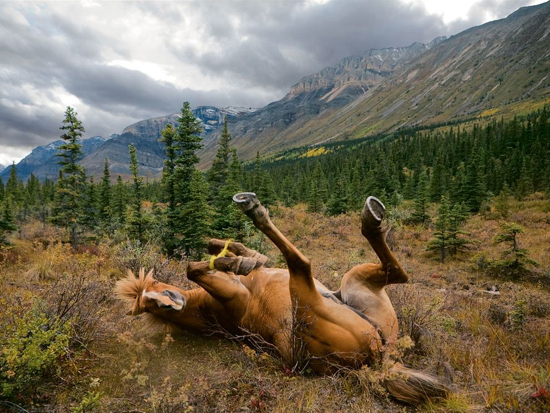 A wild dog peers out from tall green grass in Botswana. 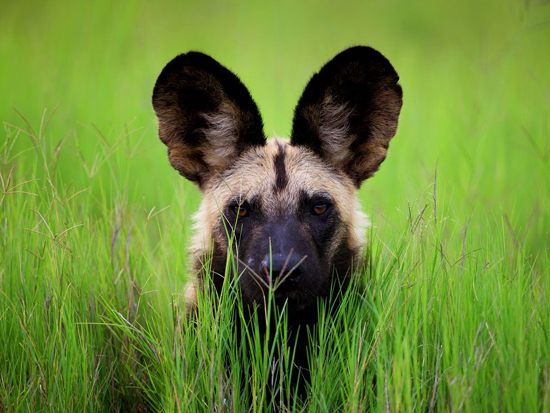 Andrew and his friend, a young sperm whale named Scar, swim together off the west coast of Dominica. The two of them became “friends” after Andrew saved Scar’s life. 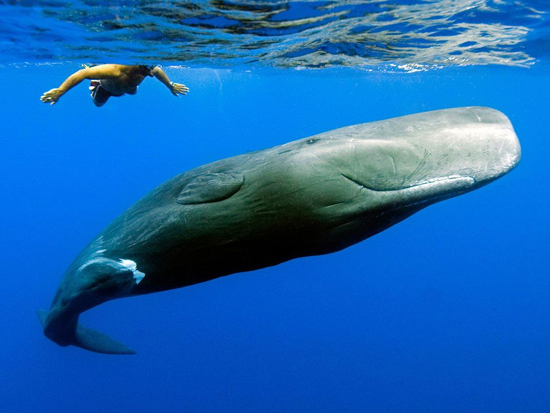